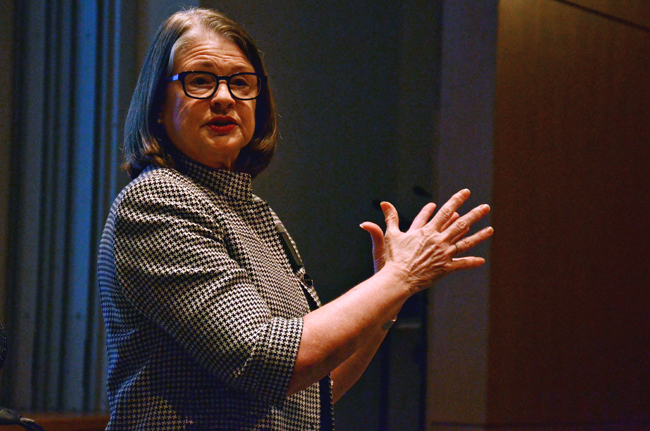 Stanford psychology professor Laura Carstensen speaks to an audience at the O’Donnell Jr. Building on Friday afternoon. Carstensen’s lecture, “Exploding the Misery Myth,” dealt with the emotional effects of aging in older populations. " />

Stanford psychology professor Laura Carstensen speaks to an audience at the O’Donnell Jr. Building on Friday afternoon. Carstensen’s lecture, “Exploding the Misery Myth,” dealt with the emotional effects of aging in older populations.

While, for young adults, negative stigmas may surround growing old, a visiting professor said there are misconceptions about misery of aging in a lecture at the University on Friday.

In her lecture titled “Exploding the Misery Myth,” Laura Carstensen, Stanford University psychology professor, said some assume older people are more depressed because they are closer to death.

“When I entered this field, about 30+ years ago, at that time there was very little research on emotion and aging, or well-being and aging,” Carstensen said. “It was mostly on biological and cognitive changes with age. The idea was, of course, emotion follows the same course and people are getting increasingly vulnerable— increasingly frail. They get increasingly depressed, sad and anxious. After all they’re coming closer and closer to the end of their lives, so why wouldn’t that be?”

Carstensen said, as people get older, their social circles get smaller, and they do not interact with as many people, which allows for more meaningful relationships with the people with whom they do interact.

“It turns, and many people began to find that older people are not sad and anxious and lonely,” Carstensen said. “In fact, they have lower rates of every known form of psychopathology except for dementia, which is by definition a disease by old age and a brain-based disease by old age.”

“People keep telling people your age this is the best time in your life,” Carstensen said. “I think, knowing that emotionally speaking, that’s not true. That in fact, it’s the flip — that this is probably the worst time in your life — [that] can help people think about the future more easily.”

According to Carstensen, research on older populations should not focus on the size of social circles.

“At one point we decided we should not simply be looking at how large or small social networks are but who are in those networks,” Carstensen said. “We don’t believe this is about age as much as it is about time, future time.”

“It was adaptive when you were a freshman to go to a lot of parties so you could get the friends you need,” Fingerman said. “We are adjusting our behaviors at all stages in life to fit our goals, and so each of those behaviors is adaptive for that goal.”

Eden Davis, human studies and family development graduate student, said that getting older should be looked at as a chance for strengthening relationships.