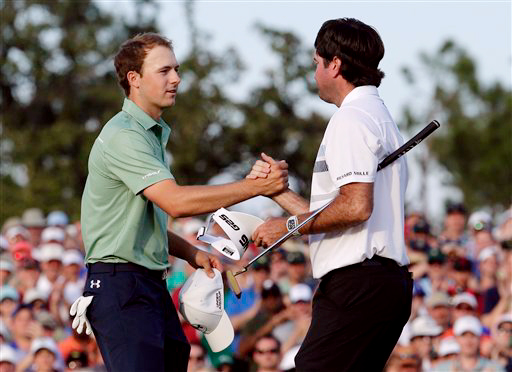 Alongside the rest of the golfing world, Jordan Spieth was forced to watch Bubba Watson sink putt after crucial putt en route to a final-round comeback that gave him his second green jacket in three years. Although Spieth could not maintain the pace set by Watson, the former Longhorn gave a debut that was notable in ways that cemented him in Masters history.

The 20-year-old Spieth had all of America buzzing as he entered the tournament’s final day tied atop the leaderboard at 5-under-par, within striking distance of passing Tiger Woods to become the youngest player to ever win the Masters. This prospect became even more attainable when he jumped out to a 2-stroke lead after the seventh hole.

Unfortunately, things momentarily unraveled for him on the eighth and ninth holes, as he bogeyed each while Watson sunk back-to-back birdie putts in a sudden 4-stroke swing. In the end, overcoming these blunders proved too tall a task for the Texas ex, as he finished 3 strokes behind Watson.

On the surface, many have pointed to Rory McIlroy’s 2011 collapse and argue Spieth’s performance mirrors it. McIlroy, who was 21 years old at the time, also could not maintain a multiple-stroke lead in the final round with a chance to become the second youngest player to win the green jacket.

The comparisons stop there, though. Spieth’s final round resembled nothing close to McIlroy’s breakdown three years ago, when the Northern Irishman choked away a four-shot lead by shooting an 80 over the final 18 holes, which equates to a score of 8 over par. When it was all said and done, he finished tied for 15th and 10 strokes off the leader.

To this day, McIlroy’s performance is considered one of the biggest meltdowns in Masters history. Spieth, on the other hand, shot a 72 on Sunday, giving him an even score for the day. While it wasn’t enough to keep up with Watson, who clearly looked more confident as he made his late charge, his final round wasn’t a collapse. If anything, it was a testament to his mental fortitude.

After bogeying the last two holes on the front nine, Spieth could have easily folded under the pressure. Instead, he maintained his composure, finishing tied for second and finishing just one over par on the back nine.

Despite coming up short, Spieth showed resolve and maturity that far exceed his youth. At 20 years old, he missed his chance to surpass Tiger as the youngest Masters champion but has simultaneously emerged as a household name. With a sharp mind and the skill set to match it, Spieth will no doubt become a familiar face atop PGA Tour leaderboards for years to come.