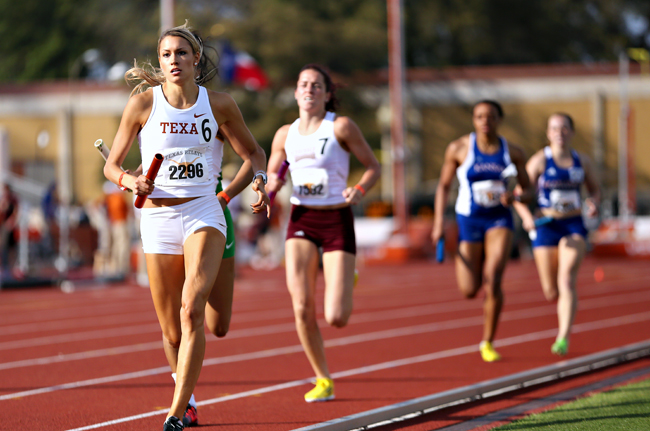 Senior middle distance runner Katie Hoaldridge competes in the 2014 Texas Relays. Hoaldridge is using her experience on the track and field team to pursue a career in the music industry.

The NCAA proudly flaunts that the overwhelming majority of its athletes — 99 percent, according to some sources — go professional in something other than sports.

Senior middle distance runner Katie Hoaldridge has made it a point to throw her energy — and there’s a lot of it, in her case — behind both aspects of the student-athlete classification.

The senior has achieved first team all-Big 12 status in the 800-meters, indoor 1,000 meters and indoor distance medley, becoming one of Texas’ best middle distance runners as she strives for records on the track.

In addition, Hoaldridge already has her degree in radio-television-film and hopes to balance her possible future in track with the pursuit of a career in the music industry.

Hoaldridge took the fall semester away from the team for the communication school’s “Semester in Los Angeles” program, which gave her an opportunity to work with Sony Music and Warner Brothers. This made some of her coaches a tad nervous.

“[Head coach Mario Sategna] jokingly was like, ‘If I would have been in charge when you got the go to do that, I wouldn’t have let you,’” Hoaldridge said. “But it kind of worked out in my favor.”

Sategna may have been hesitant to let one of his top veterans take leave from the team during the offseason, but he recognizes that academics come before the athletics.

“We’ve always talked to them about using track and field as a springboard, and what better way to be here at the University of Texas and to be here for the right reasons?” Sategna said. “When you have juniors and seniors, they’re looking on to their next career opportunity. We want to support them to the fullest.”

Hoaldridge’s decision to pursue an internship in Los Angeles meant that she had to work even harder to maintain her national-championship-caliber fitness level.

“It was so hard,” Hoaldridge said. “I would wake up at 6 a.m. … then I wouldn’t get home until 8 p.m., and then I’d just go to the gym because it would be night time, and I’m not going to go run by myself in Los Angeles.”

Her performance this season has proven that even major obstacles, such as a significant lack of sleep and being thousands of miles from her coaching staff, do not fluster the senior. Hoaldridge anchored the 4×800 meter relay team to a second-place finish at the Texas Relays and has posted what should be an 800-meter qualifying time for the NCAA West Regionals, where a strong performance could land her in the championship meet.

“I would like to close out the season with a good performance at NCAAs.” Hoaldridge said. “I’ve never made [the NCAAs] individually before.”

A strong showing at the NCAA Outdoor National Championships this summer would serve as a wonderful transition from one career into another, but, if an opportunity arises, Hoaldridge would still love to run after college.

“Obviously, if I go full throttle in the music industry, that’s not necessarily going to be an option because I probably will never sleep,” Hoaldridge said. “But, if that is an option, I would love to pursue it. This season kind of determines my next move, but, if I can run, I would love to.”