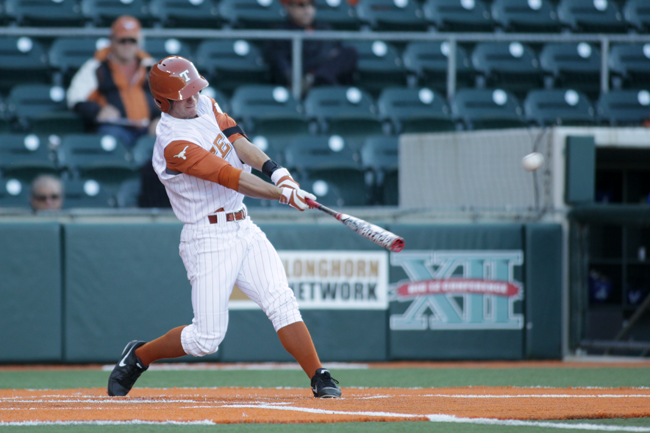 Ben Johnson led the Longhorns past UT-Arlington on Tuesday evening with a 2-for-3 effort at the plate, along with three RBIs and four runs scored. Texas had little trouble against the Mavericks in a 10-2 victory.  " />

Ben Johnson led the Longhorns past UT-Arlington on Tuesday evening with a 2-for-3 effort at the plate, along with three RBIs and four runs scored. Texas had little trouble against the Mavericks in a 10-2 victory.

After just one hit through the first two innings, sophomore left fielder Ben Johnson made sure Tuesday night wouldn’t be a repeat for Texas.

The sixth-ranked Longhorns (30-8, 9-3 Big 12) knocked off UT-Arlington (16-21) 10-2, extending the team’s win-streak to four games after their sweep of Oklahoma over the weekend. Texas tallied seven hits against the Mavericks, a number that made head coach Augie Garrido happy after his team got just one hit last Tuesday night.

UT-Arlington struck first in the ball game, chasing freshman pitcher Blake Goins after just one inning and taking a 1-0 lead heading to the third. Following a Zane Gurwitz single, Johnson smashed his team-leading fourth home run over the left-field wall to give Texas a lead it would never give up.

“I think we captured a lot of the momentum with our pitching, oddly enough,” Garrido said. “I think [sophomore pitcher] Chad Hollingsworth, when he came into the game, turned the game around.”

Texas padded its lead in the fourth inning, showcasing great plate discipline in the process. Johnson singled in another run before back-to-back walks, and a sacrifice fly by junior outfielder Collin Shaw added two more to make the Longhorns’ lead 6-1 after four innings.

UT-Arlington’s only threat came in the top of the fifth inning when it scored on an RBI single to make the Texas lead 6-2. The Longhorns responded again in the bottom half of the sixth when Johnson came across the plate for the third time on a wild pitch.

The Longhorns notched its third three-run outburst of the game when freshman catcher Tres Barrera cleared the bases with a three-RBI triple. With that hit, Barrera eclipsed the 0.300 mark for batting average for the first time this season.

“I think we just played really consistent throughout and put a lot of runs on the board,” Johnson said. “We did a great job of executing. We’ve been doing that the last couple of weeks and it’s really been paying off for us.”

Johnson’s 2-for-3 and three-RBI performance raised his batting average eight points to 0.295, good enough for third-best on the team behind senior outfielder Mark Payton (0.348) and Barrera (0.302).

Texas will look to extend its win streak Thursday when it hosts the first game of its three-game series with TCU.

“We’re anxious,” Johnson said. “I mean obviously [The Horned Frogs are] a really good team. [They have a] great pitching staff with Brandon Finnegan, and a bunch of those guys [are] potential first round draft picks. We’re excited. We love facing those kind of pitchers, and we’re really excited for this weekend.”