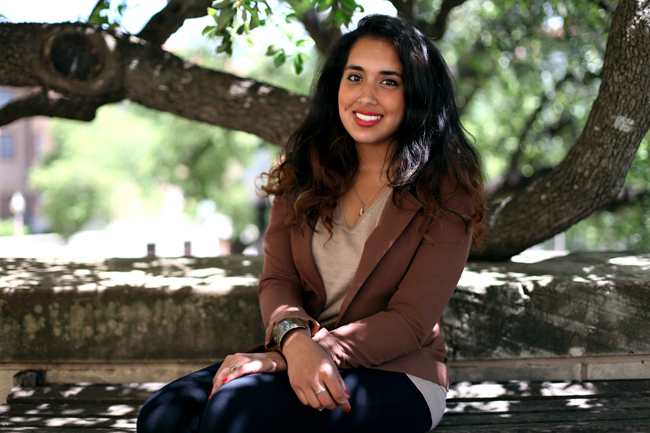 Anisha Srivastava, Plan II Honors and business honors freshman, is the founder of Project Activate, a program focused on mentoring low-income high school students and guiding them through college applications. The program has been implemented at two schools, one including Reagan High School which have 90 percent of their students below the poverty line. " />

Anisha Srivastava, Plan II Honors and business honors freshman, is the founder of Project Activate, a program focused on mentoring low-income high school students and guiding them through college applications. The program has been implemented at two schools, one including Reagan High School which have 90 percent of their students below the poverty line.

During an after-school study session at John H. Reagan Early College High School, students struggled to finish their geography homework because the school wouldn’t allow them to take textbooks home. One student, a senior named Ivan, worked on an Austin Community College application with the help of two UT student mentors, who are members of the student-run group Project Activate. Ivan said he wants to go to art school one day, but he is undocumented. He is looking to his mentors to help him apply to college and for financial aid.

Anisha Srivastava, Plan II Honors and business honors freshman and Project Activate founder, launched the program on March 19. Its goal is to enlist college students to mentor low-income high school students at least once a week.

“I thought about how going through college apps was so overwhelming,” Srivastava said. “I started thinking, ‘What are students who are first-generation and low-income, who can’t afford the resources, whose school doesn’t offer the resources — how are they even applying to college?’”

According to the Institute of Education Sciences, the dropout rate for high school students in the lowest income bracket was more than 12 percent in 2011. Reagan High School, one of the two schools Project Activate works with, has a student population that is 90 percent below the poverty line, according to Srivastava. The program currently provides mentorship to a range of students who are low-income, first-generation and in some cases, undocumented.

Srivastava realized that the path toward college begins early, so she expanded the program to mentor students starting in their freshman year.

“We can help them a lot when they are juniors and seniors, but if they haven’t worked since freshman year to get the grades and to get involved, then it won’t really matter,” Srivastava said.

The program assigns each high school freshman a college freshman mentor. Srivastava said the objective is that both mentor and mentee graduate at the same time.

“I think what’s going to be unique about this is that, rather than one person evaluating the progress of a whole class, it will be just me and my mentee for all four years,” Srivastava said. “I will be able to really explain in detail what she’s improved on.”

Plan II Honors freshman Missy Glasenapp is a mentor with Project Activate. Glasenapp said she was drawn to the idea of a student-run organization helping younger students.

Srivastava said she wants the mentors to be a source of stability and reliability in the students’ lives, as well as to help them academically.

“I wanted to get help,” Macedo de Paz said. “You can also really increase your communication skills with this.”

Srivastava hopes to implement Project Activate in more high schools around Austin and possibly expand it to other cities in Texas. Mentors such as Glasenapp have committed to helping these students for four years.

“I think we could do a lot of good,” Glasenapp said.