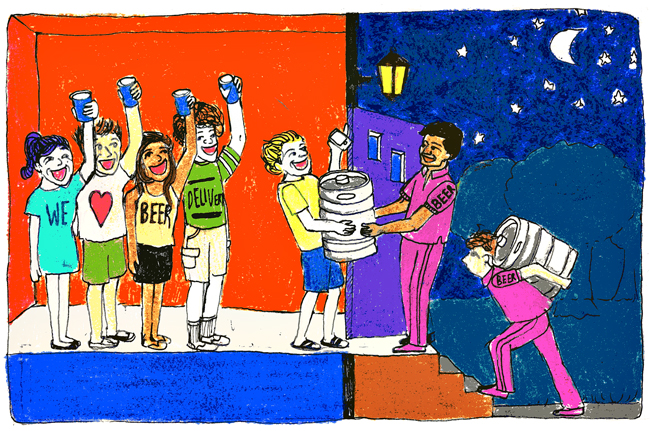 BrewDrop is an Austin-based app that will allow customers to browse inventory from the store nearest to them, choose their order from a selection of beer, wine and liquor and have their purchase directly delivered to their door in about 30 minutes. BrewDrop is the first app of its kind to launch in Texas. App production began about a year ago and will be available for download in May.

Brothers Matt and Andrew Bell, BrewDrop president and CEO, respectively, along with chief technology officer Gerardo Trevino, developed the idea for BrewDrop after an incident at Matt Bell’s wedding.

“There was a concern that there wasn’t going to be enough wine, so some of the groomsmen were sent out,” Andrew Bell said. “They ended up coming back with no wine and a keg, and that was kind of the ‘aha!’ moment.”

BrewDrop acts as a middleman between the customer and the local vendor. For a $5 fee, the customers place their orders and delivery teams from individual stores drop off the purchases. Although it is delivered, the same rules for in-store purchases apply — liquor is only available for purchase until 9 p.m., and beer and wine are available until midnight.

“BrewDrop empowers local businesses,” Bell said. “One thing we stress is we’re not selling or delivering any of our own alcohol, we’re partnering with stores and helping them reach more customers.”

“A couple of places do delivery service, like Smitty’s, but you have to call up in advance and know what you want,” said Jay Egger, marketing coordinator and former Daily Texan staff member. “Our generation is so used to everything being on our phones, so this makes it easy.”

BrewDrop will be Far West Liquor and Fine Wines’ first service to deliver on a nightly basis.

“It was something that we started thinking about while sitting around one night,” said UT alum Ryan Robertson, co-owner of Far West Liquor. “We wondered if we might start our own delivery to add another revenue stream.”

Alcohol delivery is what Smitty’s Beer and Wine has specialized in for the past few years, but the owners found BrewDrop to be a means of branching out.

“We thought it was a good idea to help business and get our name out there,” Smitty’s co-owner John Cubano said.

The BrewDrop team is also marketing toward college students.

“I think we’re going to get lots of students with the kegs,” Egger said. “We’re hitting the frats hard; we have all the fraternity presidents on a contact list.”

BrewDrop and its partners follow standard TABC rules. Customers will be required to show their identifications at the door before any money or alcohol is exchanged, though, that means BrewDrop could possibly lose out on the delivery fee. The vendors do not think carding will be a problem.

“It’s not going to be any more difficult than what we do currently in the store,” Robertson said. “Also, I believe they’re exploring preliminary authentication to start a profile on BrewDrop that requires a 21-year-old license.”

In the near future, BrewDrop hopes to expand and partner with more liquor stores.

“However many partners it takes, that’s how many we’re going to sign on,” Bell said. “We’re trying to be the first to take over Austin and help everyone get their alcohol in an easier way.”