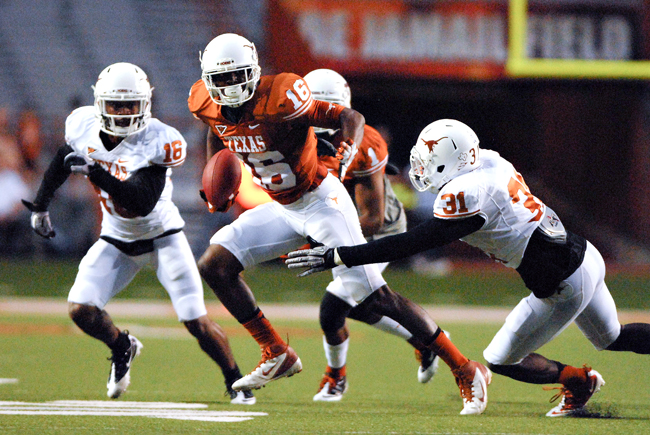 Many eyes will be on sophomore quarterback Tyrone Swoopes when the Longhorns take the field for the annual Orange-White scrimmage Saturday. New head coach Charlie Strong expects fierce competition from every longhorn in the game.

As spring practices conclude Thursday, a new era begins at the spring game for Longhorn football.

For the first time since the late ’90s, a new head football coach will roam the sidelines at Darrell K Royal-Texas Memorial Stadium during Saturday’s Orange-White Scrimmage. Head coach Charlie Strong said he doesn’t expect the team to just go through the motions Saturday.

“I always look at that game like you did all that hard work,” Strong said. “You had 14 good practices, and now is a chance to see the fans in the stadium — I know we are going to have a good turnout. And then allow them to just go out and not so much have fun, because we want to score and we want to keep them from scoring on defense, but just make sure that, offensively, we are able to execute, and defensively, we are able to
stop people.”

During spring practices, the Longhorns suffered some injuries, including junior redshirt quarterback David Ash with a fractured foot, junior running back Johnathan Gray recovering from a torn Achilles suffered last season and senior running back Joe Bergeron, who is away “to handle some personal issues,” according to a UT spokesman.

“You still have a quarterback in [Tyrone] Swoopes,” Strong said. “Then you have Malcolm Brown, and we were able to take [Jalen] Overstreet and move him to running back, so I don’t think it is going to be depleted. Those guys are injured, but you always have guys and that is why you recruit, so now it is time for someone else to step up.”

The quarterbacks for the spring game include Swoopes, senior Miles Onyegbule, a converted tight end, and walk-on Trey Holtz.

Offensive coordinator Shawn Watson said the team has worked on up-tempo offense, but only on a situational basis.

“We worked out of the huddle for the first couple of weeks simply because we wanted to coach them,” Watson said. “We will execute things that we feel like we want to get seen on film. It’s more about the players right now, putting them out there and seeing what we have.”

“When you get into the spring game, it’s about having fun,” Bedford said. “It’s about everybody that’s out — walk-ons included. They are a big part of this program. We are going to play everybody. We are not trying to scheme or trick anybody — real simple.”