TCU’s Finnegan shuts down No. 6 Texas to take first game of series 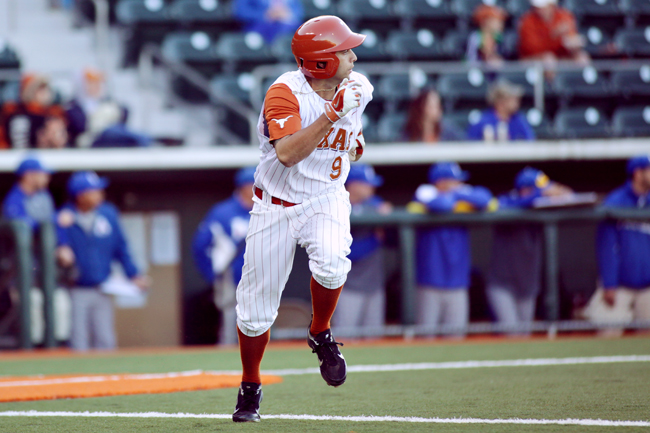 Sophomore C.J. Hinojosa got a double off of TCU's Brandon Finnegan, who surrendered just four hits, and struck out 11 in eight innings.

With the weekend series having moved up a day for Easter, TCU took a rainy game one 3-0 as No. 6 Texas had no answer for junior pitcher Brandon Finnegan, a projected first round pick in the 2014 MLB draft, in front of 20-plus scouts at UFCU Disch-Falk Field.

The game, quite predictably, turned into a pitcher’s duel as the top two pitching teams in the Big 12 trotted out their typical Friday night starters. Junior Parker French (4-3) and his 2.27 ERA paired up against Finnegan (7-2) and his 1.56 ERA.

“I don’t think anyone in the nation would be hitting [Finnegan] tonight,” French said.

After four, quick, scoreless innings, the Horned Frogs (24-13, 8-5 Big 12) finally broke through for three in the fifth inning after a lead-off double got things started.

An RBI single drove in the first run and put men at the corners. Then, with two outs, French threw a pick-off throw to first away to allow another TCU run. With the same batter at the plate, a grounder off the glove of the diving junior second baseman, Brooks Marlow, allowed TCU to tack in the third run of the inning.

“I felt good tonight,” French said. “That one inning, though, kind of got away from me.”

That was all the Horned Frogs would manage against French, who went 6.1 innings, allowing six hits and two earned runs, followed by sophomores Travis Duke, Chad Hollingsworth and Ty Culbreth’s combined hitless 2.2 innings. But TCU wouldn’t need any more.

Finnegan mowed down the Longhorns, going eight innings, allowing just four hits — none after the third — while striking out 11. Texas had opportunities early but couldn’t push home any runs.

The Longhorns’ (30-9, 9-4 Big 12) first major chance came in the second after junior designated hitter Madison Carter’s bunt moved sophomore shortstop C.J Hinojosa, who doubled to lead off the inning, to third. But a freshman first baseman Kacy Clemens strikeout and a freshman third baseman Zane Gurwitz fly out to center ended the threat.

“Truth of the matter [is] we didn’t score early,” Garrido said. “In those three innings, we were as good as anybody. Great pitchers do what he did after that. He took his game up a notch.”

Texas managed no more hits after the third as Finnegan got into a groove.