Texas track and field strives for consistency in game against Baylor 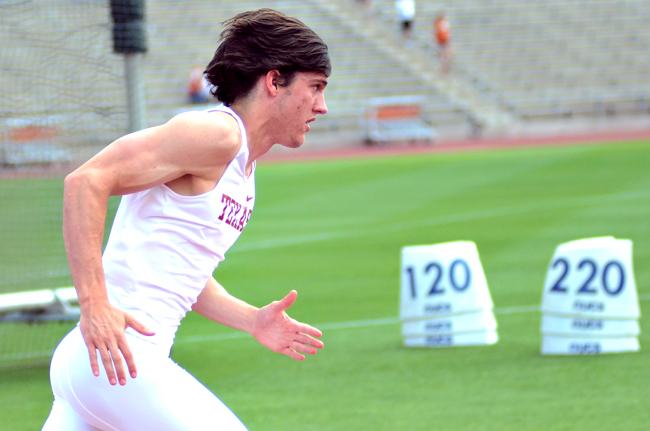 When Texas meets Baylor this weekend, Sophomore runner Zack Bilderback is expected to perform well in the 200-meter event.

The Longhorns will travel to Waco on Saturday for the Michael Johnson Dr Pepper Classic, searching for their first bit of consistency this season.

Coming off a successful performance on both the men’s and women’s sides last weekend at the Texas Invitational, athletes will start to getmore repetition at Baylor.

“We’re going to start doubling, tripling up each meet,” head coach Mario Sategna said. “You just kind of progress it along. You don’t want to do too much because it’s still very early in the outdoor season, and you’ve got to be healthy all the way through the middle part of June if you go to the national meet, so you can’t ever afford any setbacks.”

Some runners to watch on the men’s side are freshman Senoj-Jay Givans in the 100-meter and sophomore Zack Bilderback in the 200-meter. Both sprinters received blazing marks last Saturday, but they were discounted because of wind.

The No. 3 women will compete this weekend with the hopes of further asserting their dominance over Big 12 rival No. 19 Baylor, whom the Longhorns scorched with seven first place finishes at last weekend’s Texas Invitational.

Sophomore sprinter Courtney Okolo, who was named Big 12 Track and Field Female Athlete of the Week on Wednesday, will try to build upon her performance last weekend in which she finished with the top 400-meter time in the nation. If she performs well, Okolo could qualify in the 200-meter for the NCAA West Regional Meet.

At this point in the season, Sategna wants to ensure that top athletes such as Okolo are making the adjustments necessary to consistently achieve the top times.

“We can still fine-tune and look down the road to regionals and nationals,” Sategna said. “When you see consistent high marks, that is when you know teams have really broke through.”