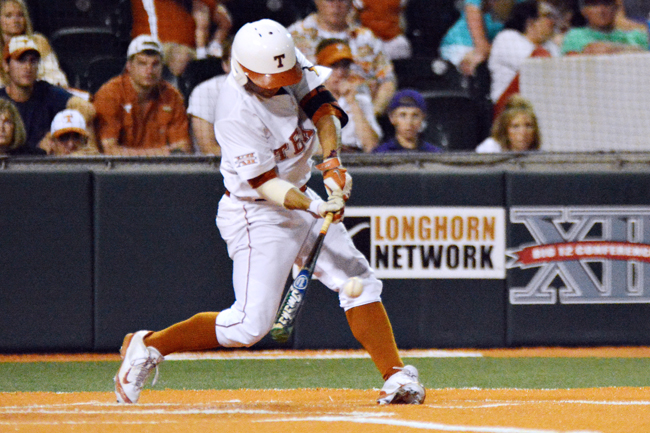 Sophomore C.J. Hinojosa takes a swing during Texas' weekend series against TCU. The Horned Frogs swept the Longhorns as Texas had flashbacks to last year's struggles.

While the Longhorns didn’t blow their chances at postseason play this weekend, their three straight losses to TCU took them back to last season, if just for those three games.

The Horned Frogs’ pitching dominated Texas (30-11, 9-6 Big 12) last weekend, as the Longhorns tallied only one run in the three-game series. Although TCU boasts one of the best pitching staffs in the country, the lack of runs mirrored Texas’ 2013 campaign when hits didn’t always translate into runs.

The Longhorns notched 17 hits in the three-game series, which makes their one run that much more glaring in the box scores. Head coach Augie Garrido said the weekend served as a measuring stick, as solid pitching is all the Longhorns will see in postseason play. Garrido said TCU was by far the best pitching Texas has seen all year.

“Yes, [the TCU pitchers] distracted them from their hitting plan, and that’s what you saw,” Garrido said. “They started swinging at pitches outside the strike zone. They got disoriented. They have never seen pitching like this.”

Perhaps the only bright spot for Texas over the weekend was senior outfielder Mark Payton, who extended his reached-base streak to 80 consecutive games in Game 3 of the series. Payton tallied three hits over the weekend while sophomore shortstop C.J Hinojosa led the team with four in the series.

The Longhorns will look to get back on track Tuesday night when they face off with UTPA for the second time this season. In the first meeting between the teams, the Broncs gave Texas everything it could handle before the Longhorns eventually pulled out the 2-1 victory in extra innings.

Payton still leads the team with a .345 batting average, but Texas now has a combined eight hitters with an average of .250 or better, as compared to just four hitters for the Broncs.

As always, the Longhorns will look to their pitching staff, which still boasts a stellar combined ERA of 2.13 despite allowing eight runs last weekend. The Longhorns now sit in third place in the Big 12, three games behind Oklahoma State for first place.

Tuesday’s game, which starts at 6 p.m. at home, gives Texas an opportunity to find its swing again and get its momentum back as it heads into another important conference series this weekend against conference-leading Oklahoma State.