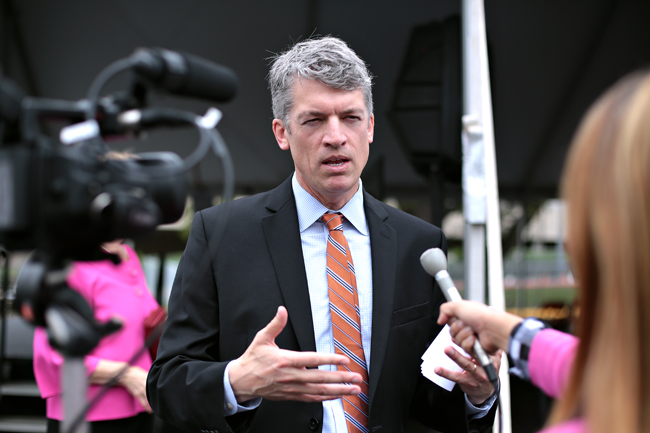 Clay Johnston, inaugural dean of the Dell Medical School, speaks to media after the new medical school’s ground-breaking ceremony on Monday morning. The Erwin Center and Cooley Pavilion site will be relocated in order for the new school to be built on the intersection of 15th and Red River streets. " />

Clay Johnston, inaugural dean of the Dell Medical School, speaks to media after the new medical school’s ground-breaking ceremony on Monday morning. The Erwin Center and Cooley Pavilion site will be relocated in order for the new school to be built on the intersection of 15th and Red River streets.

The University launched construction of the Dell Medical School on Monday during a groundbreaking ceremony with state, city and University officials in attendance.

The medical school will feature an education and administration building, a research building, a medical office building and a parking garage, totalling 515,000 square feet. The predicted cost is $334 million and will be located at the intersection of 15th Street and Red River.

Seton Healthcare Family, which runs several hospitals in Austin, committed $295 million last year to build a teaching hospital for students enrolled at the medical school. The school is scheduled to accept its first class of students in 2016.

At the ceremony, President William Powers Jr. asked the speakers at the event and community members in attendance to write one word on a poster board, summarizing their individual hopes for the medical school. Powers wrote, “Innovation.”

“If we all express our hopes and then pull together to make those hopes a reality, we will have a true treasure in our community and a great new source of health and healing,” Powers said.

Clay Johnston, dean of the Dell Medical School, said he wanted to focus on advancing medical practices in the new facilities.

“We have a responsibility to take advantage of our newness, to test out different ways of doing things that could become models for the rest of the country,” Johnston said.

State Sen. Kirk Watson, D-Austin, who has supported the addition of a medical school in Austin, said the school will transform the Central Texas area.

“We’re all going to experience this transformation — it will be big,” Watson said. “Really, it probably had to be big. I don’t know that this community would have come together for something incremental, something folks might or might not notice as they went about their lives. We invested in something that will change what it means to live in Central Texas.”

Mayor Lee Leffingwell and UT System Chancellor Francisco Cigarroa attended the event. In February, Cigarroa announced he is resigning as chancellor in order to practice medicine full-time as head of the pediatric transplant team at the UT Health Science Center at San Antonio.

“It, fundamentally, really brings a focus, at least for me, that education saves lives,” Cigarroa said. “It’s extremely meaningful because I well know how lives are going to be impacted for the better as a result of this.”

Because of the extensive construction on Red River, the road will be closed between 15th Street and the Erwin Center between May and December.

Powers said he hopes the medical school will contribute to advancing the Austin community.