Updated: 18 protesters arrested for criminal trespassing after sit-in at the Tower 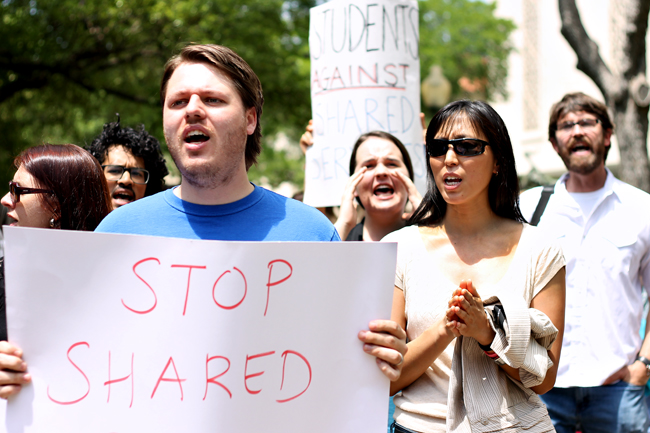 Updated (6:18 p.m.): Earlier Wednesday, geography senior Sydney Dwoskin, one of the protest leaders, said she felt the sit-in was an important component of students' efforts to halt Shared Services implementation.

"At this point, we feel we have no other choice," Dwoskin said. "We're not going to leave 'til we get Shared Services cut."

Updated (5:59 p.m.): Of the 19 Save Our Community coalition members who protested in Powers’ office, 18 have been arrested and will be charged with criminal trespassing, a Class B misdemeanor, according to University spokesman Gary Susswein.

“[The protesters] were given several warnings by the dean of students’ office that at 5:00 p.m. that the office would be closing and they needed to leave,” Susswein said. “They did not, so they have been arrested.”

Over the loud chants of students protesters on the first floor of the Tower, Susswein said University administrators have engaged in dialogues with community members about the implementation of Shared Services.

“Our vice president for financial affairs has met with students repeatedly, and continues to meet with them and is open to do so,” Susswein said. “Absolutely, there’s been honest discussion, there’s been open discussion, and we continue to welcome feedback from faculty, staff and students on this.”

“Students have every right to protest and to do so peacefully, and they were in the foyer outside the presidents’ office for 90 minutes this afternoon, protesting peacefully,” Susswein said. “That was not an issue.”

Updated (5:23 p.m.): Police officers are escorting student protesters out of the building in groups of three. For more updates live from the scene, follow reporters Jacob Kerr @jacobrkerr and Madlin Mekelburg @madlinbmek on Twitter.

Updated (5:12 p.m.): A coalition of students protesting against Shared Services are conducting a sit-in outside President William Powers Jr.’s office, and were told by UTPD officers that they will be arrested if they have not vacated by 5:00 p.m.

The 19 students protesting want Powers to halt the two Shared Services pilot programs in the College of Education and the Office of the Provost, according to Plan II junior Bianca Hinz-Foley, a representative of the protesters.

“They are demanding that President Powers cut ties with Accenture and halt the Shared Services ‘pilots’ and instead look to faculty, staff and students, not consulting and outsourcing firm bad actors, for bold and innovative solutions to challenges we face today,” Hinz-Foley wrote in a press release issued earlier Wednesday.

Original story: More than 200 students, faculty and staff gathered at the West Mall on Wednesday to protest the implementation of Shared Services.

Members of the Save Our Community Coalition — which includes members of the Workers Defense Project, Texas State Employees Union, the University Leadership Initiative and many more University organizations – organized the protest.

Shared Services is a plan to centralize University human resources, finance, information technology and procurement services. The plan calls for the elimination of 500 positions, which University officials have said will take place primarily through attrition and retirement. President William Powers Jr. endorsed the final recommendations produced by the Shared Services Steering Committee in March. The committee is now moving forward with pilot versions of the plan in the College of Education and the Office of the Provost.

In a speech at the rally, Faculty Council member Dana Cloud, associate communication studies and rhetoric and writing professor, said she believes reports of the University being short on money are false.

“The administration has been somewhat on the ropes and has started to spin the situation of Shared Services, and our speakers will speak to kind of the mystification going around: That it’s not so bad, that we’ve listened to people, that we’ve adjusted according to input,” said Cloud, who is also a member of the Save Our Community Coalition. “I think your presence here today shows that’s pretty much bullshit.”

City Council member Mike Martinez said he believes Shared Services is a form of privatization that will cost tax payers exponentially more money than it will save.

In an interview with The Daily Texan last month, Kevin Hegarty, vice president and chief financial officer, said he believes opponents of the plan do not understand the University’s current business model is unsustainable.

“We’re getting starved on the academic end for dollars to hire teachers and retain people,” Hegarty said.

Linguistics graduate student Adam Tallman, a member of the Texas State Employees Union, said he believes admistrators have failed to address community concerns about Shared Services’ implementation, including the possibility of an increased workload on staff members who remain at the University.

“The problem is that when you cut those jobs, productivity in the rest of the University is going to go down,” Tallman said.

In his letter endorsing the steering committee’s findings, Powers said he wanted to make sure the Shared Services implementation was tailored for UT’s needs.

“I have asked [Hegarty] to carry out that charge in a thoughtful manner that is customized to our campus,” Powers said in the letter.

Victoria Vlach, a course scheduler in the department of Asian American studies who was recently laid off because of centralization within the College of Liberal Arts separate from Shared Services,  believes Shared Services threatens to ruin the University’s reputation as a top-tier institution.

“Education is not a one size fits all assembly line,” Vlach said. “These policies intentionally eliminate the very people who provide the skilled expertise, which serves and supports the faculty and students.”