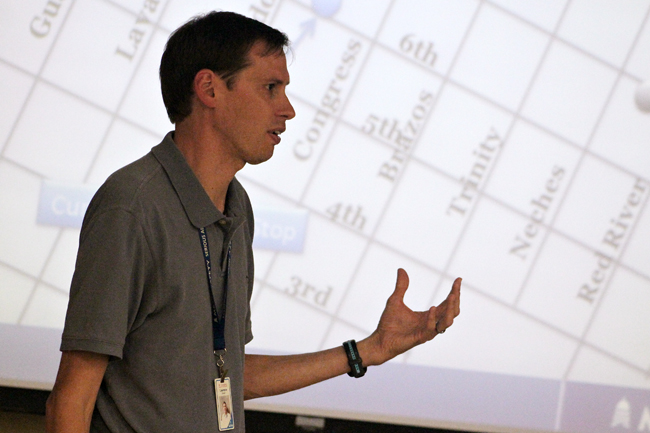 Lawrence Deeter, Capital Metro transportation planner, discusses the Pickle Research Campus shuttle route at a public forum on campus Tuesday night. Starting in fall 2014, the route will make the transition to a MetroRapid route in order to improve travel times for students getting to campus.  " />

Lawrence Deeter, Capital Metro transportation planner, discusses the Pickle Research Campus shuttle route at a public forum on campus Tuesday night. Starting in fall 2014, the route will make the transition to a MetroRapid route in order to improve travel times for students getting to campus.

Parking and Transportation Services and Capital Metro representatives discussed a proposal that would change the current Pickle Research Campus shuttle route to a MetroRapid route, at a public forum on campus Tuesday night.

The PRC shuttle route, which connects the Pickle Research Campus and the main UT campus, currently has stops near the intersection of Dean Keeton and Whitis and the intersection of Dean Keeton and San Jacinto. Blanca Juarez, UT Parking and Transportation spokeswoman, said the route will be transitioned to the existing MetroRapid 803 route, which goes along Burnet Road and Lamar Boulevard.

“[The new route] will improve reliability and increase days of operations,” Deeter said. “PRC is the lowest performing route right now, and we’ve trimmed it over the years because it has the lowest ridership.”

According to Juarez, the new route will run seven days a week, unlike the current UT shuttle route, which only runs Monday through Friday. Juarez said it will also run more frequently: about every 10-12 minutes during rush hour.

“PRC only operates about 12 hours a day and stops every 60 minutes,” Juarez said. “With the Metro route, there will be a lot more travel options to get to and from the two campuses.”

Deeter said the new route will also include features not found on the UT shuttle buses, such as real-time arrival information, mobile ticketing and free onboard Wi-Fi.

Travel time from the research campus to the main campus would remain about the same compared to the PRC Shuttle and would be 20 percent faster than Route 3 Burnet/Manchaca, which also stops by the Pickle Research Campus, according to Deeter.

Deeter said one downside of the transition is that the new MetroRapid route locations require a greater walking distance down Dean Keeton than the old PRC stops did.

“The rapid only stops on Guadalupe, and there’s two stations — one by the West Mall, and one by Dean Keeton — which means there’s about a six-minute walk,” Deeter said.

Additionally, the new route will eliminate one stop on the north side of the Pickle campus, which could reduce access for students in that area, Deeter said.

Engineering researcher Rick Pastor said the change could prove problematic for some students who take the UT shuttle to get to West Pickle Campus.

“We teach a class out at West Pickle in the fall, and some students ride the PRC out there, and now they won’t be able to do that,” Pastor said.