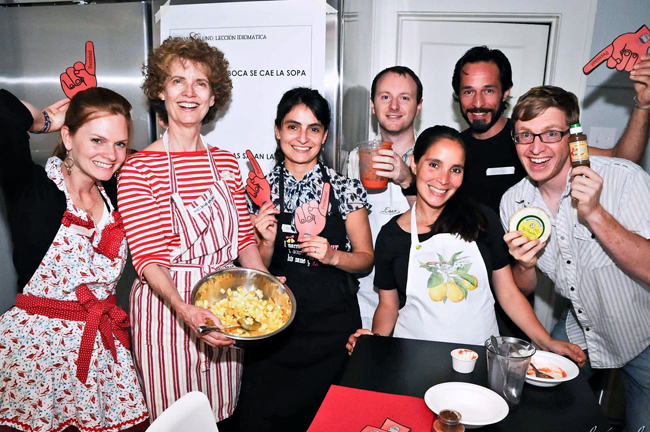 Daniel Heron has no interest in being a commercial cook. The UT alum and Austin-based entrepreneur believes that food goes beyond the industry — it is a platform for different cultures to connect and understand each other.

Heron is an instructor at Austin-based Cooking Up Cultures, a nonprofit that offers a fusion of language and cooking classes. These classes allow participants to learn a language in a kitchen environment, using food as a way to understand the basics of a language quickly.

When he studied at UT, Heron co-founded The Food Lab, a UT think tank that generates awareness about food systems, food justice issues and food politics. He also created the UT Food Studies Project, which allows students to focus on how food can be used to control nations and how to think about food from different angles.

Heron, who considers himself a food-loving global citizen, said he first discovered his passion for languages and culture during his time in Latin America.

“From my experience in Brazil, in poverty, some of the foods that we eat in abundance and with ease here in the U.S. can be really used as a method of helping your brain deal with your economic status,” Heron said.

Heron is also the brainchild behind a monthly soup party called “Global Soup,” which he said he started to celebrate Austin’s diversity. Each month, Heron and the team at Cooking Up Cultures choose one language and cuisine to highlight, and a local chef prepares a soup based on a recipe from that chosen culture.

“We wanted to do more outreach events,” Cooking Up Cultures founder Casey Smith said. “Even if you don’t want to sign up for an entire class, you can still experience the cross-cultural influences through one monthly event.”

Currently, Cooking Up Cultures offers language learning classes in English and Spanish with “Cooking Up Arabic” beginning in May and other classes in French, Russian and Chinese that will be launched soon.

“We have so many languages in the world today, so we were thinking about which ones we are were going to focus on,” Heron said.

Smith and Heron decided that the easiest way to choose the languages they wanted to offer would be by choosing the six official languages of the United Nations.

Food, for Heron, is a way to overcome the common fear of other cultures.

“Moving to Texas was a radical change for me,” Heron said. “I was an obese person for most of my childhood. I knew my mom wasn’t going to cook for me anymore. Once I began cooking, I started seeing the world through the lens of food, in everything that I did. I now want to use food as a platform to build community and bridge cultures.”

Immersion-styled language learning is what makes “Cooking Up English” and “Cooking Up Spanish” a fun experience, according to Heron. “This way, no matter where you are at, you are always going to get something out of it,” Heron said.

The five-week classes have been structured to allow people to start learning recipes from day two of the class. Participants are discouraged from translating from English or Spanish to their native languages and are allowed to do so only when they truly do not understand what the instructor is asking them to do.

Spanish instructor and Cooking Up Cultures board member Adriana De La Cuadra said the whole idea of the class is to learn as you go along.

Cuadra, an Austin entrepreneur, is also co-founder of Lista, a web application to make it easier for people to cook at home.

“Language brings you closer to cultures,” Cuadra said. “The combination of cooking and language classes brings out the complexity of a culture through cooking.”