Texas baseball battles for top of Big 12 against Oklahoma State 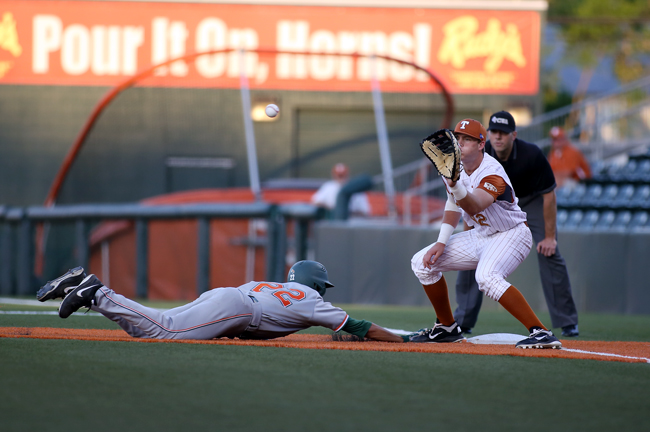 Freshman first baseman Kacy Clemens has dazzled with his defensive play this season, currently holding a .988 fielding percentage on the season. Clemens is also hitting .236 at the plate.  " />

Freshman first baseman Kacy Clemens has dazzled with his defensive play this season, currently holding a .988 fielding percentage on the season. Clemens is also hitting .236 at the plate.

If Texas wants to capture the Big 12 title this season, it has to do it this weekend.

The Longhorns’ hitters were baffled by the Horned Frogs pitching staff last weekend but rebounded with a 5-4 win over UT-Pan American on Tuesday night. Oklahoma State doesn’t boast a dominant pitching staff, but its offense will truly test the Texas pitching staff, which leads the Big 12 with a combined 2.15 ERA.

OSU hitters are hitting a combined .267 for the season while averaging just more than six runs per game. Texas pitchers are holding opposing offenses to just a .223 average this season and will need to be as sharp as they have been all season with three hitters batting over .300 for the ’Pokes.

While the Longhorns were being throttled by TCU, scoring only one run the entire series, Oklahoma State swept the Jayhawks with 18 runs in three games. OSU has lost only two of its last 14 conference games and will head into this series with the momentum to prevent Texas from winning a conference title.

Although Texas will honor its seniors Sunday before game three, sophomore left fielder Ben Johnson will enter Friday as the hottest hitter in the Longhorn lineup. Johnson is coming off of a 2-for-3 and two RBI performance against UTPA and is currently third on the team with a .292 batting average. He also leads the team with five home runs this season.

Senior star center fielder Mark Payton and pitcher Nathan Thornhill will be playing their last conference games at home this weekend. Payton leads the team with a .342 batting average while leading the conference in on-base percentage (.471) and walks (34).

Thornhill, who has been spectacular all season long, leads the Big 12 with a .97 ERA to go along with his 6-1 record.

Each team has two more conference series after this weekend, but a solid showing from Texas could be the difference between a conference title and a good year entering postseason play.