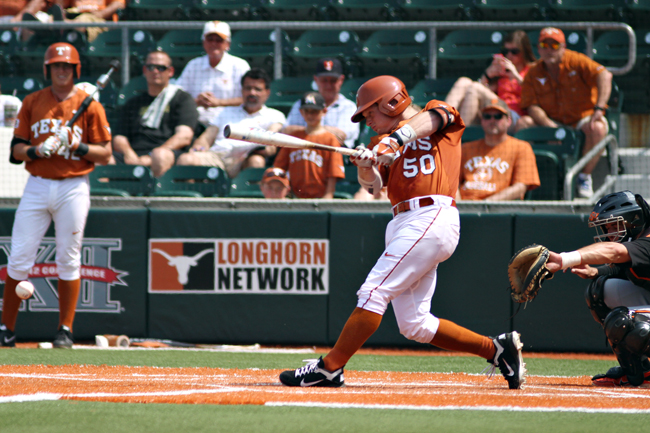 Freshman infielder Zane Gurwitz grabbed his 13th multiple-hit performance with a 3-for-4 performance Saturday. Though Texas dropped its weekend series against Oklahoma State, Gurwitz led the team to outhit the Cowboys 7-2 in Saturday's 2-1 series win.

The Longhorns fell to the Cowboys 8-3 in Game 3, keeping them three games behind in the Big 12. Oklahoma State struck first with a two-run homer in the top of the second, before chasing Thornhill from the mound after another two-run homer and five runs in the fourth.

Texas looked poised to make a comeback in the bottom of the second when freshman catcher Tres Barrera sent the first pitch he saw over the left field wall to cut the lead to 2-1. But after the five-run outburst in the fourth by the Cowboys, Texas’ only threat came in the ninth on an RBI-double by Payton.

The Longhorns got the series started with a 3-0 victory on Friday night, behind a two-hit shutout from junior pitcher Parker French and sophomore Chad Hollingsworth. Texas outhit the Cowboys 7-2 behind a 3-for-4 performance by freshman third baseman Zane Gurwitz, his 13th multiple-hit game of the season.

“He [Gurwitz] provides leadership without saying a word and by his presence on the field,” head coach Augie Garrido said. “He is really a gift. He is a ballplayer through and through.”

The weekend went downhill from there, though, as two losses allowed Oklahoma State to clinch the series 2-1. The Longhorns’ lack of runs was arguably the most disconcerting part of the weekend.

After surrendering just two hits to the Cowboys in Game 1, the Longhorns recorded only two hits of their own in the second game, falling to Oklahoma State 2-1 on Saturday afternoon. Texas jumped ahead early but couldn’t solve the puzzle of the Cowboys’ pitching in a game that mirrored the first. Payton and sophomore outfielder Ben Johnson recorded Texas’ only hits in the
ball game.

“When you lose, it isn’t always because you are bad. Sometimes you lose to the scoreboard — we lost to the scoreboard today,” Garrido said. “They didn’t do much more than we did today. They got on base more and had more opportunities, but we battled our way out with our pitching and defense and played the game pretty darn well.”

Texas will look to rebound Tuesday when it faces Prairie View A&M at home.