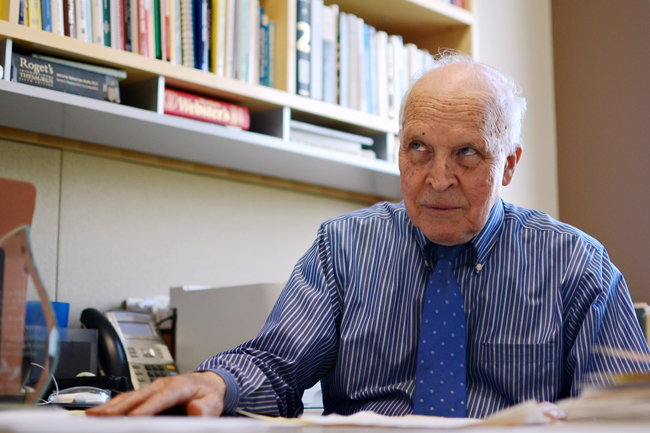 Journalism professor Gene Burd, the longest serving faculty member in the school of Journalism, is retiring after 42 years of teaching at the University. Burd will likely be granted emeritus status because of his large influence on the school. " />

Journalism professor Gene Burd, the longest serving faculty member in the school of Journalism, is retiring after 42 years of teaching at the University. Burd will likely be granted emeritus status because of his large influence on the school.

Although the longest serving faculty member in the journalism school said he feels like he is not ready to leave, Gene Burd is retiring after 42 years of teaching. Burd’s last day will be Thursday.

“Forty-two years, my gosh,” Burd said as he glanced over his 28-page resume. “I would have stayed on indefinitely here because I love what I do, despite a lot.”

Although Burd has had the longest tenure at the journalism school, he said he is still one of the lowest paid faculty members and has not had a promotion in 39 years.

Burd’s most recent post-tenure review, which evaluated his past six years of teaching, said he is not an active participant in the operation of the journalism school, which includes catching up with technology. In 2012, the school introduced an updated curriculum to include classes centered around new media.

“I could’ve stayed on with these certain conditions,” Burd said. “New technology — I’m behind on it and that’s a weakness in journalism.”

Burd said he has taught classes at the graduate and undergraduate level, and started at the University teaching basic reporting, news writing and feature writing. Burd has also taught senior fellows courses seven times — more than any other faculty member in the school.

“I would be frustrated and have some problems as well as successes in almost any institutional, corporatized, bureaucratic setting, which is the nature,” Burd said.

According to Burd, his interest in cities and urban communication began as a young boy when he moved from the Missouri Ozarks after the Dust Bowl to Los Angeles in the 1930s. Burd practiced journalism at The Kansas City Star, Albuquerque Journal, Houston Chronicle and several other weekly papers, and gave away more than $1.6 million of his savings for research — including money to create The Urban Communication Foundation, to improve the research of journalism and communication.

Journalism school director Glenn Frankel said Burd made the decision to retire, and the Moody College of Communication Budget Council and Dean Roderick Hart unanimously voted for Burd to be granted emeritus status because of the enormous impact Burd has had on the school. The proposal must be approved by President William Powers Jr.

“He was a very important figure in the school, and I think [in] making the school a fairer, more equitable place where students came first and where everyone had a voice,” Frankel said.

Mercedes De Uriarte, a close colleague of Burd’s who taught interdisciplinary courses in American studies, Latin American studies, women and gender studies and journalism, said she and Burd’s common interests allowed them to connect when she came to the University in 1987.

De Uriarte said Burd’s broad knowledge of the field of journalism will be a huge loss for the school.

“I think the University makes a mistake when they don’t find roles for people who have been there for 42 years,” De Uriarte said. “When they don’t find ways to draw upon all the knowledge that’s been acquired over that period of time — I think that’s a serious loss for not just the University, but for the students who come along who could benefit.”

Burd admitted that his lack of knowledge of the new media technology was a barrier for teaching journalism as it evolves, but he felt like he has extended himself into many areas and departments.

“When you’ve been around 80 years you collect more than lint,” Burd said.

Burd said emeritus status will allow him to finish things he’s put off because of being a professor, such as poetry and finishing several manuscripts.

“There are scores of unpublished things that I’m trying to assemble,” Burd said. “On my tombstone, you know what it should say? ‘Poet.’”