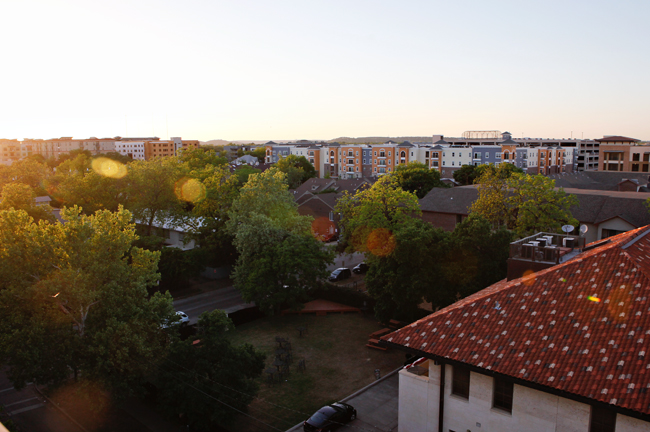 The sun sets just beyond West Campus on Monday evening. Although the City of Austin will lower property taxes, students can still expect to pay more for rent in the years to come.  " />

The sun sets just beyond West Campus on Monday evening. Although the City of Austin will lower property taxes, students can still expect to pay more for rent in the years to come.

Despite city officials’ proposal for a significant drop in Austin’s property tax rate for the coming year in the Austin City Council meeting Thursday, many expect rent prices in West Campus to continue their steady rise.

According to city council documents, the forecast presented by city council financial staff in the meeting projected a 0.70 percent decrease in the property tax rate for fiscal year 2014-2015, with “an emphasis on maintaining affordability.” This year there was a 0.20 percent drop from the tax rate of the previous year, after the rate had increased each year since 2007.

Austin City Manager Marc Ott said the increase in the city’s property value has allowed the budget to account for the decreased property tax rate.

“The departments were, by me, instructed to develop an expenditure and revenue forecast with focus toward keeping the property tax rate flat,” Ott said. “I can tell you that they have done a very good job in that regard. That, in combination with some benefits that we’ve experienced in terms of property value, has not only enabled us to look at keeping the property tax rate flat, but to do better than that.”

Government sophomore Ryan Rafols, who is a member of Austin Independent Citizens Redistricting Commission, the group that drew Austin’s 10 new district boundaries in November 2013, said he does not think the drop in the property tax rate is the best method to foster affordability for students in West Campus.

“You can’t really control property value,” Rafols said. “[City council] can do their best to lower the tax rate, but … as long as there is a demand and limited supply, the value will go up. I think the bigger issue is just regulation of apartment costs for students.”

Chris Lanier, a real-estate agent for Longhorn Central Leasing, said he thinks the combined factors of the increased property value and decreased tax rate will result in a continuation of rising prices of rent for West Campus apartments.

“If they did [raise rent prices], it might be to a lesser extent,” Rafols said. “[Property tax rate] is only one of the factors of increasing rent. I think, if that’s the status quo, it’ll pretty much stay the same.”

Rafols believes there is still room for improvement within city policies that deal with student living in West Campus.

“I believe city council is doing what they can to lower [prices],” Rafols said. “They’re not really helping students, and they’re not trying to hurt students. They’re just keeping the status quo. … I think city council could do more for affordable student housing.”