SG too closely affiliated to UT to discuss private loans 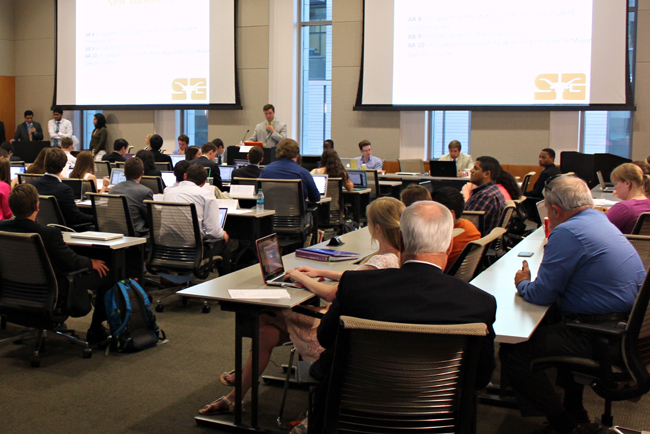 Student Government discusses the inability to inform students about the B-On-Time Loan at the general meeting Tuesday. According to federal law, SG is too closely affiliated with the University to recommend private loans. " />

Student Government discusses the inability to inform students about the B-On-Time Loan at the general meeting Tuesday. According to federal law, SG is too closely affiliated with the University to recommend private loans.

Student Government’s initial decision to inform students about the B-On-Time loan has been halted because, according to federal law, the organization is too closely affiliated to the University.

The B-On-Time program is a no-interest state loan that is fully forgiven if a student graduates on time with a GPA of at least 3.0. Currently, the University is not allowed to recommend private loans to students, including state loans, unless the student asks about the specific program.

In early April, SG Chief Justice Philip Wiseman and other SG members planned to raise awareness about the B-On-Time loan to make up for the University’s inability to recommend private loans. The SG members were later informed by Tom Melecki, student financial services director, that they would be unable to tell students about the loan because of the federal restriction.

“Under the federal law, SG is too closely affiliated as an institution-affiliated organization, and, as a result, any kinds of prohibitions that are placed on the University, by extension, are also placed on SG,” Wiseman said.

The University does have the option to promote these loans if they advertise a list of approved lenders to students, though the University does not use this method because it cannot guarantee the trustworthiness of independent lenders, according to Melecki.

According to Wiseman, a resolution in support of the bill, H.R. 3371, would provide students an opportunity to bring up the B-On-Time loans without SG recommending them.

The bill would amend the Higher Education Act so state institutions could provide information about state loans and allow universities to renew students’ loans without them having to reapply.

Wiseman said SG would begin a yearlong, strategic push to work with state representatives and raise awareness about the bill.

“We’re going to set the groundwork for something that could develop into a much larger, statewide campaign,” Wiseman said. “This is a minor setback at most.”

Melecki said students can also be informed about the program through the Texas Higher Education Coordinating Board, which sends out an email to students who need to renew their loan.

“It’s a great program because there’s a financial aid component, and there’s also the component of trying to advocate for the student to not only graduate on time, but with a pretty high GPA,” Tirloni said. “The benefit on the back end of the program is great for students.”