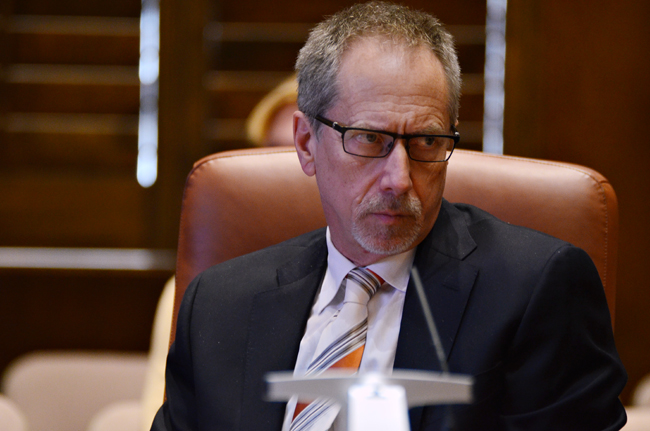 UT System Regent Alex Cranberg says he recorded System Chancellor Francisco Cigarroa’s remarks during a closed session meeting of the Board of Regents in order in order to correct the notes he took during the meeting. " />

UT System Regent Alex Cranberg says he recorded System Chancellor Francisco Cigarroa’s remarks during a closed session meeting of the Board of Regents in order in order to correct the notes he took during the meeting.

UT System Regent Alex Cranberg recorded a closed session meeting of the Board of Regents in August, without the knowledge of System Chancellor Francisco Cigarroa, who was present for the meeting.

System spokeswoman Jenny LaCoste-Caputo said all members of the board have been asked not to record meetings held in executive session, which are closed to the public.

“There is no specific rule saying that you couldn’t record an executive session, although the board attorney would have never thought someone would record it,” LaCoste-Caputo said.

In a statement, Cranberg said he recorded the meeting in order to preserve Cigarroa’s remarks for future discussions with members of the board.

“I believed that it was very important that I understand exactly what the chancellor said and how he said it, both for my own guidance and to be better able to discuss these remarks later with my fellow regents,” Cranberg said.

According to Cranberg, he has kept the recording private and only released it to the house transparency committee investigating Regent Wallace Hall after they issued
a subpoena.

Cranberg said he used the recording to correct written notes he took of the meeting, cataloging Cigarroa’s performance assessment of President William Powers Jr. and the regents’ discussion on Powers’ future as president.

Tensions between Powers and members of the board have been ongoing since 2011. Cranberg’s notes mention Cigarroa’s request for Powers to resign, which Powers refused.

At a December board meeting, which some speculated would end in Powers’ termination, Cigarroa recommended Powers remain president of UT, although he issued a warning to Powers, urging him to improve his relationship with the System and the board.

Cigarroa announced his resignation as chancellor in February and said it was unrelated to the existing tension within the board. Cranberg’s notes on Cigarroa’s performance assessment of Powers include a discussion of Cigarroa’s resignation.

“We cannot let this linger any longer,” the notes said. “Defined and well organized exit plan by the end of the semester. (I would resign as catalyst).”

The notes also indicate Powers wanted to remain president until his son, a junior at the University, graduated. UT spokesman Gary Susswein said this claim is not accurate.

“The chancellor expressed his support for the President in December, and President Powers has been very focused since then on working with the chancellor and the chairman and the other regents to move past this,” Susswein said.