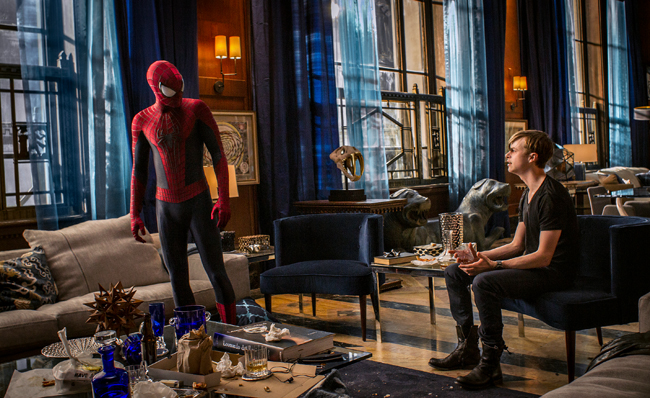 Two years after “The Avengers” made over $600 million dollars, audiences are starting to feel the repercussions. As every studio in Hollywood scrambles to replicate Marvel’s success, superhero films can no longer tell their own stories. The films must set up sequels and spin-off franchises. But, while Marvel’s weakest film, “Iron Man 2,” devoted a small chunk of its runtime to setting up future installments, “The Amazing Spider-Man 2” devotes a small chunk of its runtime to telling a coherent story. Everyone involved with this film is capable of doing better work, but they’re hamstrung by a palpable, franchise-minded cynicism.

Now that the origin story is out of the way, “The Amazing Spider-Man 2” finds Peter Parker (Andrew Garfield) reconnecting with childhood pal Harry Osborn (Dane DeHaan), who has just inherited Oscorp, the shadowy corporation that may have killed Peter’s father. Meanwhile, Peter’s alter-ego, Spider-Man, must contend with a menagerie of new villains and keep love interest Gwen Stacy (Emma Stone) out of the line of fire.

Before listing the many things this film does wrong, it’s essential to mention the things it gets right. Sony basically wrote director Marc Webb a blank check for this film, and he does a great job capturing the exhilaration of being Spider-Man, showing the web-slinging hero swinging through New York City with seamless, fluid visual effects. The film’s strongest element is the crackling chemistry between the real-life couple of Garfield and Stone, but even that is bogged down by the script by Alex Kurtzman and Roberto Orci.

“The Amazing Spider-Man 2”’s biggest problem is that the script, which has nothing resembling a central arc. Garfield makes for a great Peter Parker, affable and snarky, but the film saddles him with a dull investigation into his past that bogs the film down and fundamentally alters the nature of Peter’s character for no particular reason. The film is full of useless plot digressions like this, and there’s no driving force to the narrative, which propels its overflowing cast into confrontations with the grace and subtlety of a 6-year-old banging action figures together.

Among the sprawling supporting cast, Paul Giamatti is totally wasted as a disposable baddie in a handful of scenes. Sally Field does her best with mere minutes of screen time, coming out of nowhere to score the film’s strongest emotional beat with a simple, perfectly delivered monologue. DeHaan is impressive in the rare moments when the film allows him to cut loose and be a villain, but he struggles to make an impression when the script demands he play dour and angsty.

Jamie Foxx, on the other hand, is far more heavily featured and all the more unlucky for it. Foxx has never been more miscast than as Max Dillon, a meek Oscorp employee overwhelmed with excitement after being saved by Spider-Man. Foxx has played meek well before, but here he never moves beyond an impression of Stephen Root’s character in “Office Space.” After a workplace accident turns him into supervillain Electro, Foxx takes on a jellyfish-esque CGI varnish, and it’s tough for his performance to register when he looks like the side of a kiddie pool. All in all, Foxx’s character is utterly inconsequential to the film’s plot, but without him, the number of showy action scenes would be sliced in half.

The film’s soundtrack shamelessly panders, adding wholly inappropriate, but popular, songs from Kid Cudi or Phillip Phillips over scenes of Peter investigating his parents’ deaths or doing science experiments. But the single most embarrassing moment in the entire film — or maybe in film history — is the climactic battle in which Electro uses his powers to compose a dubstep version of “The Itsy Bitsy Spider” while he dodges Spider-Man’s attacks.

This film shouldn’t be avoided because it’s bad, but because it’s nothing more than a product – glossy and inoffensively engaging. In its desperation to be Marvel, Sony forgot to engage its audience, reducing the “Spider-Man” franchise to a, soulless trailer for films to come. The solution is simple: Don’t go see this movie.