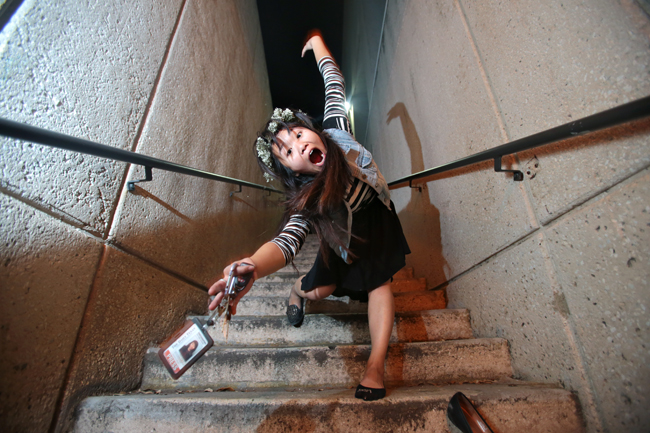 If I had known when I took those first steps down into the Texan that I would spend the next three years living in a poorly lit basement, often littered with discarded remnants of food and the constant blabbering of newspaper lingo, I would wish that maybe I had tripped and fallen down those stairs and took that as a sign to stay the hell away!

I knew nothing about journalism, photography or design except that I maybe liked it. It is here where I learned to twiddle my way around InDesign and Photoshop. I learned to photograph strangers and manage a group of kids (and a 40+ year old…), to scramble across campus and Austin, and to cover news assignments.

To my mentors when I was starting — Andrew, Ryan, Mary, Tamir, Danielle, Fanny, Lawrence, Thomas — there was something in each of you I admired and strived to be. Thank you for your guidance and letting a freshman hang with you guys. To my close friends (you know who you are) who accompanied me on smoke breaks late at night to keep me sane as we discussed the only certainty of the future — that there are no certainties, and we must simply keep propelling forward. Thank you for the encouragement and support.

To the future staffers at the Texan, you will learn many things and you will mess up many things. Pass whatever you learn to the next generation because there is no better feeling than knowing you’ve impacted someone’s life — no matter how big or small.

I’ll ramble about specific memories that come to mind. Sushi trash — delicious not really. Burnt softbox. Bill Cosby. Naked reporter dancing on table at staff party. SXSW badge thief. Heart racing during best of, worst of. You’re my Meredith and I’m your Christina. Leaving for West at 11 p.m. That one night with seniors in the studio. Why won’t you look at me in the eyes? Office crush. SXSW madness. DCI love, what’s a tech? Pujon is beautiful. Ice luge coolness. Photo’s favorite naked senior. Maaarlaaa. Falling in love in Kansas. Rain sleeve suffocating my face. Mythical hard drives with photos for blackmail. Puma. My shampoo is still in the basement shower.

It is in the basement that I found a community, my friends and a whole lot of my identity. There’s no doubt in my mind that, a couple years later, I will pass by this place and find that the photo kids are still the weirdest, comics staffers are the only ones with souls and sports is still struggling to figure out why they work with such strange people.

I did not trip down those stairs that day. I ventured on and never looked back.

I will surely miss it.