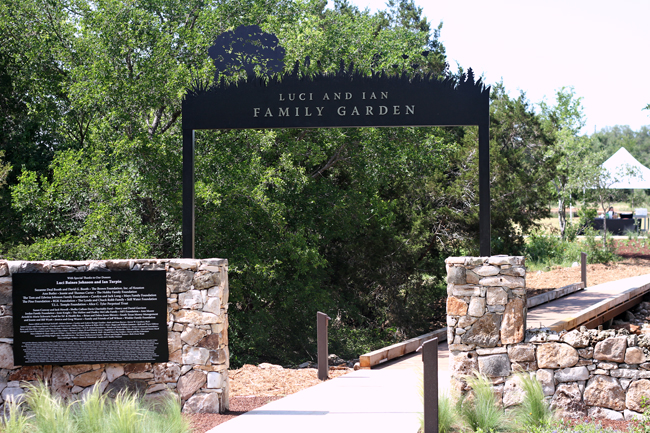 The Luci and Ian Family Garden will hold its grand opening Sunday. The garden provides multiple interactive educational areas for children, such as a maze made of shrubs.

Visitors can dig in fake dinosaur tracks, build teepees out of bamboo and explore a spiral hedge maze at the opening of the Lady Bird Johnson Wildflower Center’s new family garden Sunday.

The center has been constructing the $5 million Luci and Ian Family Garden since May 2013. According to Samantha Elkinton, senior horticulturist at the center, the 4.5 acre garden added a dirt dig and nature build area this year.

“The dirt dig will allow kids to get their hands dirty and dig around in the dirt and sand,” Elkinton said. “At the nature build area, we’ll have different materials like hay and bamboo sticks so kids can build things — teepees, buildings, gnome trails — whatever they want.”

The garden’s other features also include a grotto with caves and a waterfall, 10-foot-wide bird nests and a wildlife blind. Elkinton said she hopes the new garden will attract more visitors over the
summer months.

“We hope to attract more families, and since summer is the perfect time for kids to be outside, hopefully we’ll see an increase in visitors,” Elkinton said.

The garden will hold a special preview day only open to members of the center on Saturday. Both the preview and the opening day will include live music, food carts and activities on the children’s play lawn from 10 a.m. to 3 p.m. Elkinton said she expects between one-third and one-half of the center’s 10,000 members to attend.

According to senior associate Ronnie Stafford, who worked with the architecture firm TBG to plan the garden, native plants were chosen specifically to align with SITES standards, which are international parameters that promote sustainable land development.

Emily Mixon, environmental science senior and campus environmental center director, who has partnered with the wildflower center, said the garden could be a good site for student learning and relaxation.

“It’d be great for students to see the integrated approaches in the garden and think about what they’ve seen around campus in terms of our main campus irrigation innovations and energy efficiency,” Mixon said. “Plus, I think visiting the garden could be a really cool study break for students.”

Elkinton said feedback on the garden has been positive.

“We had kids come in for a photo shoot, and they were all excited about the features,” Elkinton said. “There was one girl who liked playing in the dirt dig so much that she wouldn’t get out of it.”