Morons like me: Eight things I learned at The Daily Texan 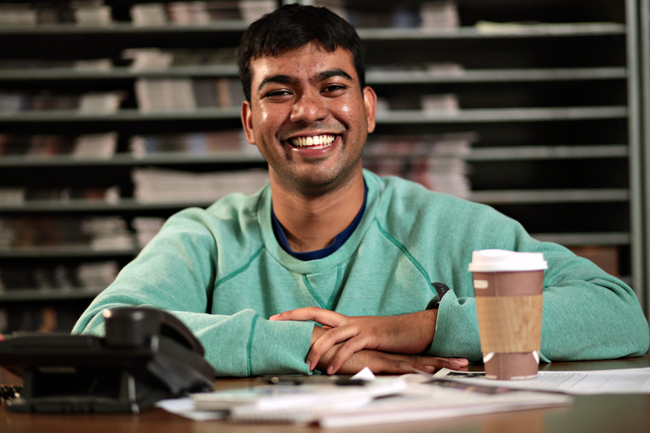 Whoever first had the idea that a bunch of kids should be running a full-fledged news organization was a complete moron.

I was neither ready enough for nor qualified enough for every job I did at the Texan. But like every other not-ready-enough, not-qualified-enough predecessor, I pretended I belonged.

Here are eight things I learned through my years at the Texan:

1. For every success a person has, there are a dozen people who won’t ever get credit for helping make it happen. We usually save our high fives and hugs for the people who make the big gestures, sometimes forgetting the ones whose persistence, critique and unsolicited feedback make us better every day.

2. Find the perfect PITA. PITA in this case stands for “Pain in the A**.” The right PITA is respectful and cares deeply but tends to score radically differently on the Meyers-Briggs test. A PITA challenges the group during meetings, makes decisions more difficult and refuses to let anyone get complacent.

3. Don’t judge people by their words, actions or deeds but rather by the autocorrect function of their phones. We can meticulously measure every word we say, but in the end, it’s the autocorrect and the predictive-word functions of our phones that reveal the most about us.

4. The two most frequent errors in human judgment are overvaluing one’s IM Softball skills and overestimating how awesome a goatee looks.

6. The world is filled with bedwetters; learn to embrace them. Bedwetters are people who are easily shaken by the unanticipated. Bedwetters can come in the form of everyday stressors to GPA obsessors, but ultimately, they mean well and keep the rest of us on track.

7. The more you expect out of people, the more you will need to care about them. In an environment in which we pay people so little, care and commitment are the only real currencies.

8. Act like you’re living in the most important moment in history — but know that it isn’t. No single issue of a daily newspaper ever changed the trajectory of human history on its own. But I like to think that the reporter who wrote the Play 1 story stripped across the top of the paper on any given day thought she was. And that the photographer who shot the DOM photo right in the middle of the page thought he was too. So did the copy editor who caught the 12th dangling modifier of the night and the designer who fixed every last misaligned stroke right at midnight.

And this is what working at the Texan has taught me: That we have to both live in the world as it is and act like it is the world it can be.

To think and act like that, you need to be confident and critical, idealistic and insistent. Basically, you have to be a little bit of a moron.

The most formative experience of my college career has been working with these staffers — these morons like me.