News to watch for after spring classes end 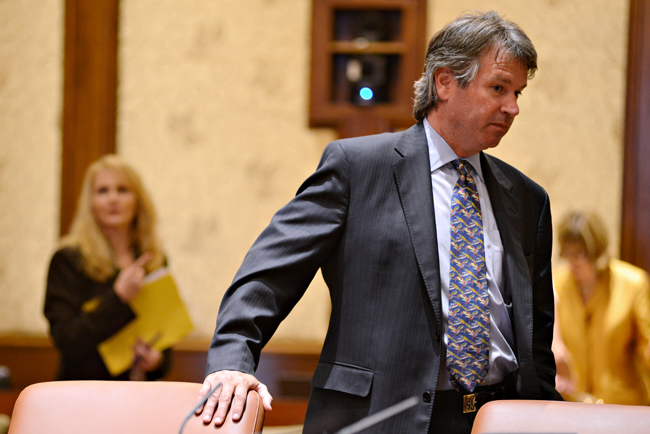 UT System Regent Wallace Hall prepares to leave after a UT System Board of Regents meeting on April 29.

REGENT CONTROVERSY
The almost year-long investigation of UT System Regent Wallace Hall will come to a close on May 12, when the House transparency committee investigating him will vote on whether to recommend his impeachment. Hall is under investigation for potentially overstepping his bounds as a regent and conducting what some legislators have referred to as a “witch hunt” to oust President William Powers Jr.

If the committee decides to recommend impeachment, Hall’s case will go to the full Texas House of Representatives. If a majority of the members of the House approve of the case’s merits, it will go to the Senate, where members will convene as a court to make a final decision. If the Senate concurs with the committee’s recommendation, Hall will be the first nonelected official to be impeached in Texas history.

Hall is also facing the possibility of criminal charges. On April 25, the public integrity unit in the Travis County district attorney’s office said they will open an investigation into allegations that Hall mishandled private student information, which is protected by federal privacy laws.

The investigation is only one of many developments concerning the regents. Paul Foster, chairman of the UT System Board of Regents, said the board plans to hire a new chancellor over the summer, to replace outgoing UT System Chancellor Francisco Cigarroa. In February, Cigarroa announced he will be stepping down to return to medicine full time as the director of pediatric transplant surgery at the UT Health Science Center–San Antonio.

The board has hired an executive search firm, Wheless Partners, to assist in its search for a chancellor.

AROUND CAMPUS
On Monday, Faculty Council will vote on whether to extend the Thanksgiving break by one day. If the vote passes, classes on the Wednesday before Thanksgiving will be formally canceled for the 2014-2015 school year.

In June, Student Government members will launch a UTexas app specifically for Android phones. The free app, which was created by computer science students, will allow students to access handheld maps and University-related news. It is currently only available to iPhone users.

LT. GOVERNOR RUN OFF
On May 27, state Sen. Dan Patrick, R-Houston, and current Lt. Gov. David Dewhurst will compete in a runoff election to determine the Republican candidate for lieutenant governor. In March, Patrick won roughly 41 percent of the vote but did not get the 50 percent necessary to be confirmed as the nominee. Dewhurst, who has been in office 12 years, received 28 percent of the vote. The winner of the run off will compete against state Sen. Leticia Van de Putte, D-San Antonio, in the general election in November.

LAW AND ORDER
Rashad Owens, the driver accused of crashing a car into a crowd during South By Southwest, will have a pre-trial hearing on June 3. Owens, who has been in Travis County Jail since March 13, has been charged with one count of capital murder and 24 counts of aggravated assault with a deadly weapon.

Gene Vela, the public affairs graduate student accused of engaging Austin police officers in an armed standoff last November, has two upcoming court dates on May 15 and June 30. Vela, who is currently being held at the Travis County Correctional Complex, faces eight charges, including two charges of unlawful carrying of a weapon, two charges of aggravated assault against a public servant and one charge of terroristic threat.