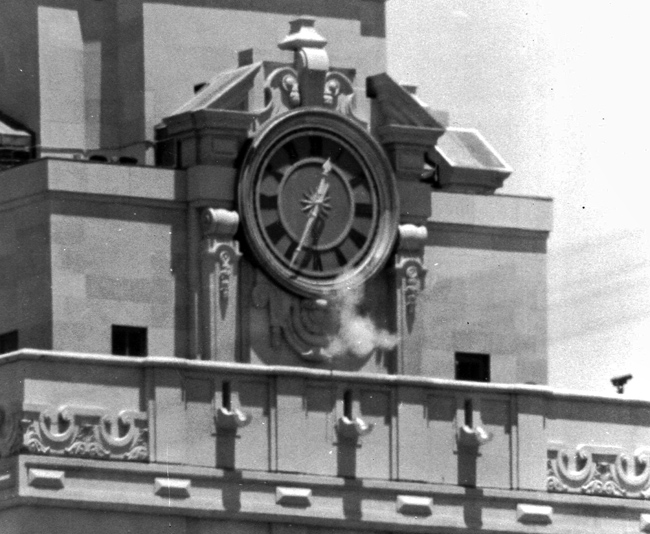 In this Aug. 1, 1966 file photo, smoke rises from Charles Whitman's sniper as he fires from the UT Tower. "Monday, Monday" by Elizabeth Crook follows the lives of three UT students who were directly affected by the rampage that killed 13 people and injured 32.

Most films about the 1966 UT Tower shooting focus on Charles Whitman, but “Tower” shifts the perspective to the people on the ground.

“Tower” is a documentary directed by Keith Maitland. Maitland has been working on the film for the past year and a half, and the finished product is expected to be released in 2016 for the 50th anniversary of the shooting.

“I’m inspired by the courageous actions of the students,” Maitland said. “There were dozens of students that took great risks to save people’s lives, and many of those individuals haven’t been honored. The film is about the strength and ability to overcome that’s in all of us. These young individuals are just the carriers of that message.”

Maitland read Pamela Colloff’s Texas Monthly article, 96 Minutes, when it was published in 2006. After reading it, Maitland wanted to look deeper into the stories of the witnesses, so he met with Colloff for lunch and proposed his movie idea to her.

“What strikes me is the sheer humanity on display that day,” Maitland said. “There were so many people feeling such a range of emotions, and I think there’s a simplified version of the history that focused on the shooter, the officers and the people most directly impacted — either wounded or killed. But an event like this affects the entire community.”

Since then, Maitland has interviewed more than 100 witnesses, ranging from faculty and students to police and media that were present during the time of the shooting. Susan Thomson, a producer of “Tower,” conducted many of these interviews.

“It really helps you see that the shooting had really affected people,” Thompson said. “It impacted people across the divisions that day. The thing that I’m so moved by is how heroically people acted … There were so many people running through the cross fire, and that’s really powerful.”

Thomson runs the film’s Indiegogo campaign. Like Kickstarter, Indiegogo is a website used for raising money and awareness for various projects.

Thomson said the project had more than 330 contributors and almost $70,000 was raised in six weeks.

For the past few months, “Tower” has been using UT students as interns for the project as a way to research, promote and edit the film. Jessica Griffin, radio-television-film sophomore, is one of the interns working with the editors of the film.

“I really like Keith’s approach to the film,” Griffin said. “In tragedies like these, people tend to focus on the shooter rather than the people that get to experience it. This documentary gives the audience the opportunity to understand what the civilians and officers went through.”

Griffin said she was surprised when she realized how little she knew about the shooting. Reactions like these are what the film is trying to fix.