No Longhorns selected in 2014 NFL Draft 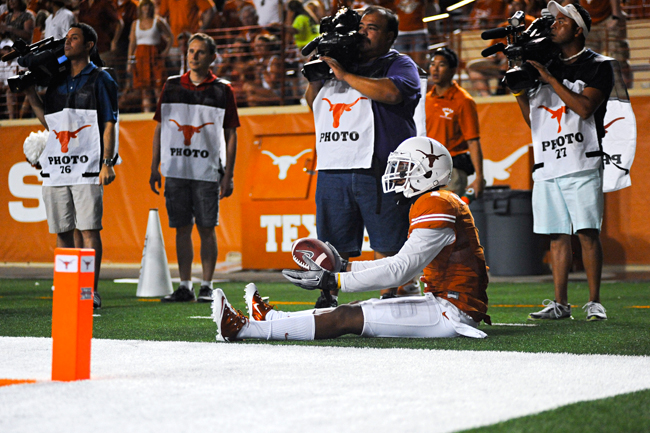 Mike Davis sits down near the corner of the end zone. The wide receiver leads the Longhorns with 20 catches this year but is part of a senior class that is in danger of becoming the first in 10 years to not reach a BCS bowl.

The 2014 NFL Draft is in the books, and for the first time since 1937, no Longhorns heard their names called.

Defensive end Jackson Jeffcoat was expected to go in the middle of the draft after outperforming his position in four of the six events in the combine. Instead, he was passed over for other defensive ends perhaps as a result of his injury prone history. Jeffcoat signed with the Seattle Seahawks as an undrafted free agent.

As of Sunday night, six other Longhorns have inked deals with NFL teams after being undrafted. Wide receiver Mike Davis is headed to the Oakland Raiders, while cornerback Carrington Byndom agreed with the Carolina Panthers.

Defensive tackle Chris Whaley will stay in state as a Dallas Cowboy, as he tries to battle back from his season-ending knee injury suffered against West Virginia in November.

The 2014 NFL Draft class was primarily composed of players who graduated high school in 2009, 2010 and 2011. During this stretch, former head coach Mack Brown inked the third, second and fifth-ranked classes in the country respectively according to ESPN.

New head coach Charlie Strong had four former players drafted from Louisville, including three in the first round. He did this despite only signing one recruiting class in the ESPN top 25 over the three-year stretch (No. 22 class in 2011).

Since the 2010 BCS Title game loss to Alabama, Texas fans have often complained about the lack of player development at Texas and changing that perception will fall on Strong and his staff.