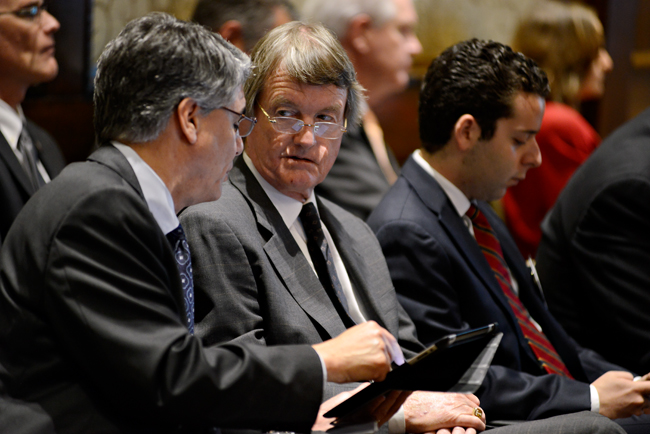 Two years after freezing in-state tuition for UT-Austin students, the UT System Board of Regents approved tuition increases for out-of-state undergraduate students at the University and tabled the discussion on in-state tuition on Wednesday.

Beginning in the fall 2014 semester, there will be a 2.6 percent increase for out-of-state students’ tuition. Along with that increase, President William Powers Jr. and Andrew Clark, former President of College Councils, also proposed a 2.13 percent increase for in-state undergraduate tuition in a presentation to the board at the meeting. The board decided not to vote on the increase to in-state tuition until its meeting on May 20. At that meeting, the regents will also discuss increases for the University's guaranteed tuition plan.

System Chancellor Francisco Cigarroa and board Chairman Paul Foster both said they want to find alternate sources of recurring revenue instead of raising in-state tuition. Foster said the board would try to direct money from the Permanent University Fund — a public endowment of land in West Texas — to each institution, rather than increasing in-state tuition.

“There are ways that we can work within the rules and within the law, obviously, in order to try to direct funds in the right way,” Foster said. “But, it’s complicated. We’re going to work on that over the next week and make sure everybody gets their questions answered.

After the meeting, Foster said the board’s decision was influenced by a letter Gov. Rick Perry sent to him Wednesday morning. In the letter, Perry asked the board to consider alternative options to tuition increases, such as using money from the Permanent University Fund.

“This time around, that’s one of the things that we are determined to do — make sure whatever mechanism we come up [with] for funding, that it is recurring,”  Foster said.

During his presentation to the board, Powers said the University’s tuition would still be lower compared to most peer institutions, despite proposed increases.

“Under this proposal, UT-Austin would continue to be at the low end of our university peer group,” Powers said. “We also deliver very high quality undergraduate education with very low expenditures for students.”

Clark, an international relations and global studies senior, said after the meeting he was pleased the board was focused on lowering costs, even though he said he would have liked to see a conclusion to the discussion.

“I personally think it’s a little unfortunate that everyone was there and ready and they presented their proposals — all nine academic campuses,” Clark said. “I’m hopeful [the board] will be able to identify sources of recurring revenue that would match what could be generated from tuition dollars…If we can get the same outcome or a better outcome without increasing tuition, then that’s great.”

In fall 2013, Clark and two other student officials formed a committee to develop the University's tuition proposal. According to Clark, the three-person committee was used in place of a full-sized panel of students, faculty and administrators because the board sent proposal instructions too late into the semester to accommodate it. The committee initially recommended a 3.6 percent tuition increase for out-of-state students and no increase for in-state students.

After the regents issued revised instructions to the University in February, an expanded committee of seven student leaders developed a new tuition proposal.  The committee recommended a 2.6 percent increase for all undergraduate students. Clark said the board lowered the in-state tuition increase to 2.13 percent before Wednesday’s meeting. Both proposals did not recommend any changes in graduate student tuition.

Mukund Rathi, computer science junior, addressed the regents after Powers and Clark presented the University's proposal. Rathi, who also encouraged the regents to use at the Permanent University Fund to offset the tuition increases, said the student input process at UT was not inclusive.

“UT has not made a serious attempt to get student input,” Rathi said. “Only ten students not in these legislative bodies had a chance to speak and every single one of these students spoke against the tuition hikes.”