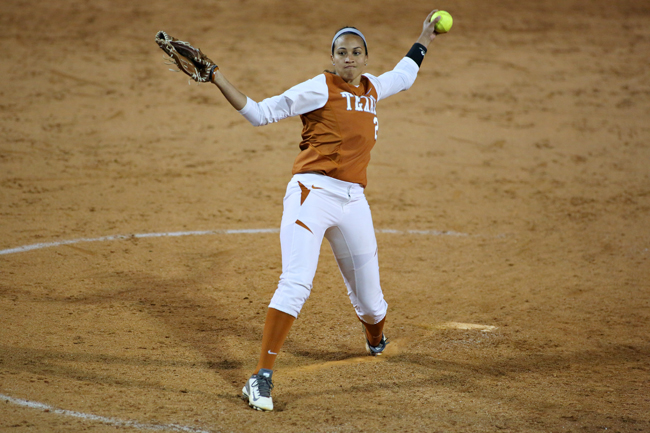 LAFAYETTE, La. – In the week leading up to the Lafayette Regional, freshman pitcher Tiarra Davis tried to keep her nerves down knowing that she would be making her first career postseason start on Friday.

But as she warmed up before the game, the nerves started to creep back.

“The more I warmed up, the more nervous I got,” Davis said.

Once the game started, though, Davis was able to conquer her nerves and settle down. She ended up striking out seven batters and kept Mississippi State off the board in a 1-0 win for Texas in the opening game of the regional tournament.

“She was really able to keep them off balance,” head coach Connie Clark said.

Davis' nerves showed early in the game as she allowed a leadoff double to right-center field. But she came back to get the next two batters to pop out and she got a strikeout to get through the first inning.

Through the next six innings, Davis would send the Bulldogs down in order only one time, but as she’s done all season, she worked out of big jams. In the fourth inning, senior first baseman Logan Foulks hit a one-out double for Mississippi State. Davis struck out the next batter and got the third out on a fly out to right.

In the top of the seventh, Davis allowed a leadoff single to put the tying run on base. But after a sacrifice bunt to move the runner to second, Davis struck out the last two batters to end the game.

Davis credited senior catcher Mandy Ogle for helping her get through the tough innings.

“She just reminds me to take a deep breath and relax and to put my trust in my defense,” Davis said.

Davis' strong control of her off-speed pitch helped her. The Bulldogs were able to only get one hit off of the changeup — the double in the fourth — and a majority of their strikeouts came on that pitch.

Clark said that the pitch has been something Davis has worked hard on the past couple of weeks.

“Obviously to be able to throw that in any count was significant for us,” Clark said.

At the plate, the Longhorns had a hard time figuring out Bulldogs senior ace Alison Owen. Through two-and-two-thirds innings, Texas only managed two hits, one of which was a bunt by senior centerfielder Brejae Washington to start the game.

But with two outs in the third inning and down 0-2 in the count, Washington surprised everyone in the stadium, blasting a solo home run to deepest part of the ballpark in centerfield to put the Longhorns ahead 1-0.

Washington said she knew it was a solid hit when she made contact, but didn’t quite know if it had the distance.

“It’s one of those things were you look up and you’re like 'get out, get out,'” Washington said.

With the win, the Longhorns move into the winner’s bracket in the double elimination tournament. Texas will face Louisianna at Lafayette Saturday at noon. The winner of that game will advance to the regional final on Sunday, while the loser will have to play Saturday evening.

The Longhorns beat the Ragin' Cajuns twice in Lafayette earlier this season by scores of 10-7 and 7-3.