More than 8,600 students graduate at commencement 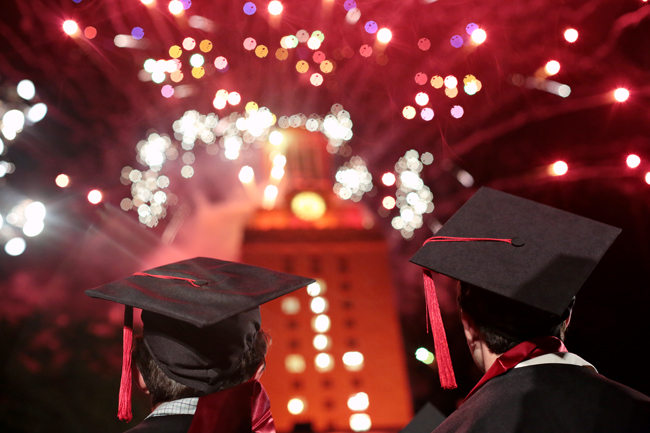 In front of an orange-lit UT Tower, 8,686 students graduated from the University at the 131st Spring Commencement ceremony on Saturday.

The event capped off two days of ceremonies held in the individual colleges and schools at UT. University officials estimate 25,000 people attended the final event, which was held on the Main Mall.

Naval Adm. William McRaven, who led the mission that resulted in the death of Osama bin Laden, delivered the keynote address at the University-wide ceremony. McRaven, a UT alumnus, shared life lessons he learned from basic Navy SEAL training and said they can help the graduates “change the world.”

“If take you take some risks, step up when the times are toughest, face down the bullies, lift up the downtrodden and never, ever give up – if you do these things, then next generation and the generations that follow will live in a world far better than the one we have today,” McRaven said.

Powers said the University benefits from having students with diverse backgrounds.

“Size and diversity are among are University’s strengths,” Powers said.

Four-year graduation rates for the class of 2014 were not available by the time of publication. In 2011, Powers created a task force with the goal of improving the University’s graduation rate to 70 percent by 2016. Over the past five years, graduation rates have ranged between 50 and 52 percent.

Along with seating on the Main Mall lawn, attendees could view the ceremony from nine indoor locations across campus, such as the AT&T Conference Center, Hogg Memorial Auditorium and Student Activity Center.

After the ceremony, biochemistry graduate Ifran Nathani said he will miss the friendships he made at UT.

“That fact that hard work is paying off makes me feel really good.” Nathani said. “I will remember all the good times I’ve had with my friends – present and past.”