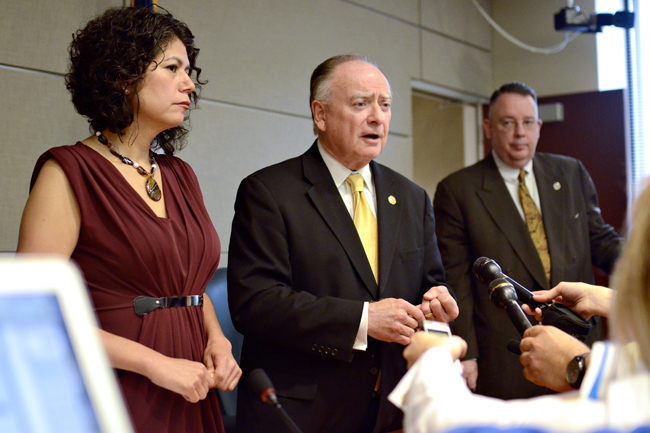 Editor's Note: Briscoe is a member of the Texas Coalition for Excellence in Higher Education, a group which has been critical of many of Regent Wallace Hall’s actions.

Adopted in 1876, the Texas Constitution calls for the Legislature to sustain a “university of the first class.” As the UT System’s flagship school, the University maintains a close relationship with lawmakers. It should come as no surprise, then, that conflicts sometimes arise between UT and politicians. The possible impeachment of Regent Wallace Hall is the most recent episode in a long line of historic tensions between the University and state government. Recently, a state transparency committee voted 7-1 that grounds exist to impeach Hall, namely his possible violation of student privacy records, ill treatment of University officials, constant records requests and siding against UT’s interests in a fundraising dispute.

Gov. James E. "Pa" Ferguson, a Democrat, feuded with the University during his time in office. A polarizing figure, Ferguson lobbied regents to fire administrators and faculty members he deemed political enemies. When regents refused, Ferguson vetoed appropriation funds for the University in retaliation. Responding to this event and other inappropriate acts, the Legislature impeached and removed Ferguson from office in 1917.

In the early 1940s, regents appointed by arch-conservative Democratic governors W. Lee "Pappy" O'Daniel and Coke Stevenson, respectively, fired several UT faculty members who vocally supported President Franklin D. Roosevelt’s New Deal. UT President Homer Rainey protested these actions and other attempts by regents to overstep their boundaries, such as censoring student reading lists. The Board of Regents fired Rainey in 1944, prompting protests from both the UT community and prominent academic organizations such as the American Association of University Professors, which publically rebuked and blacklisted UT for the regents’ actions. The Rainey episode marked the most serious battle between politicians and the University, and severely damaged the school’s reputation in academic circles.

As the University finally recovered from the regents’ handiwork and built itself into a world-class institution, it faced challenges during the late '60s and early '70s, namely from the domineering presence of board Chairman Frank Erwin. A lawyer and leading member of the Texas Democratic Party, Erwin battled both professors and students in his attempt to exert his will on campus. Erwin’s 1970 firing of John Silber, the popular dean of the College of Arts and Sciences, damaged morale and caused several prominent faculty members to leave the University. Erwin also used heavy-handed tactics to battle the emerging counterculture and prevent protests against the Vietnam War from rocking the UT campus. Notably, he attempted to cut funding for The Daily Texan, which frequently criticized his leadership.

The University suffered negative publicity, both locally and nationally, from each of these experiences, and the controversies divided the UT community. Today, Hall’s actions and the ensuing impeachment investigation are causing similar developments. The conflict stems from Gov. Rick Perry’s 2008 endorsement of the seven "breakthrough solutions" for higher education espoused by the Texas Public Policy Foundation, a conservative think tank. Perry has encouraged his regent appointees for the UT System as well as for other state university systems to support these reforms. Critics argue that the “breakthrough solutions” undermine faculty research and will cause universities to become over-populated diploma mills concerned with graduating large numbers of students at the expense of quality education.

University President William Powers Jr. has resisted these contentious measures.  Meanwhile, Hall has launched exhaustive investigations into various aspects of Powers’ administration, not hiding the fact that he wishes to see the UT president replaced. Hall’s near-obsessive requests for documents paired with attempts to micromanage the University have damaged morale among administrators, faculty, students and alumni.

Unfortunately, the current controversy recalls past instances of politicians attempting to interfere with the University’s governance and has again brought a negative light to the campus. Hall may become the first University regent removed from office in state history. Furthermore, Hall’s actions have diverted attention away from the University's recent accomplishments, such as a record-breaking fundraising campaign and the establishment of the Dell Medical School. The Ferguson impeachment, Rainey firing and Erwin saga remind us that universities function best when lawmakers allow faculty-centered governance and promote academic freedom. Politicians come and politicians go. Regents, administrators, faculty, students and alumni should all strive to promote a “university of the first class” that will remain long after the present controversy joins these past experiences as unhappy anecdotes in UT’s history.

Briscoe is a history graduate student.