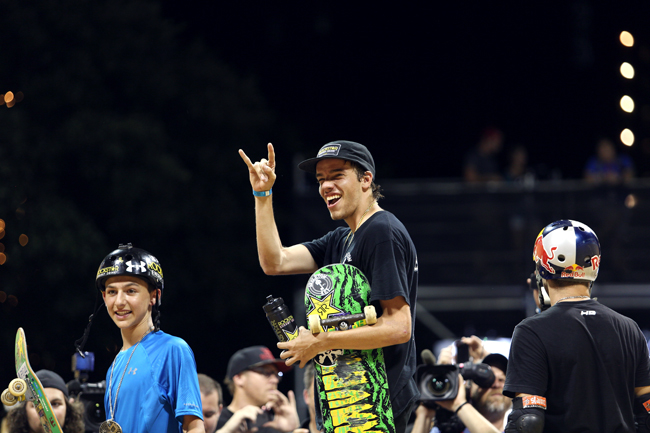 Jimmy Wilkins unexpectedly stole gold on Thursday night in the skateboard vert competition of X-Games Austin on Congress Avenue. Against the backdrop of 12,000 watchers and the Capitol building, 20-year-old Wilkins became the youngest skateboarder to win gold in vert, beating out Shaun White’s previous record.

The vert competition took place on a 60-foot wide half pipe and consisted of two rounds. In the first round, competitors had two, 30-second runs while judges scored the athletes on their style, the difficulty of their tricks and their completion of the run. The best of the two scores is used and the top six competitors in the first round went on to the finals. The finals included three, 30-second runs.

Coming into the finals with the best score was veteran Pierre-Luc Gagnon, known by his nickname PLG. PLG and fellow veteran Bucky Lasek were favorites of the competition. Lasek, in 2013, took four gold during summer X-Games in the vert category. Despite the crowd’s support for Lasek and a T-shirt he made and wore that read “I’m hurt not old,” both Lasek and PLG failed to place in the top three.

The six vert finalists are among the best skateboarders in the world. Wilkins came out on top with a score of 87.00, which gave him his first ever X Games medal. Wilkins, supposedly a skater of few words, let his moves do all the talking with a Frontside Ollie that had competitors and the crowd in awe — including Tony Hawk who Instagrammed a video of the move.

Sandro Dias and Mitchie Brusco followed Wilkins. Dias is known for being one of 10 skaters to ever land the 900. While Dias did not perform the move as watchers hoped, he still did well enough to earn an 85.66 and secure his fifth X-Games medal. Mitchie Brusco, 17 years old, came in third after three confident runs with a score of 84.00 and his fourth X games medal under his belt.

The competition was tense until the end, with Wilkins’ win not secure until PLG failed to finish the last run of the night. Wilkins came in thinking he had no chance at victory, yet the underdog rose to first with his smooth skating. At the age of 20, Wilkins is expected to have a lifetime of skating success ahead of him.