Men like Elliot Rodger are not owed anyone or anything 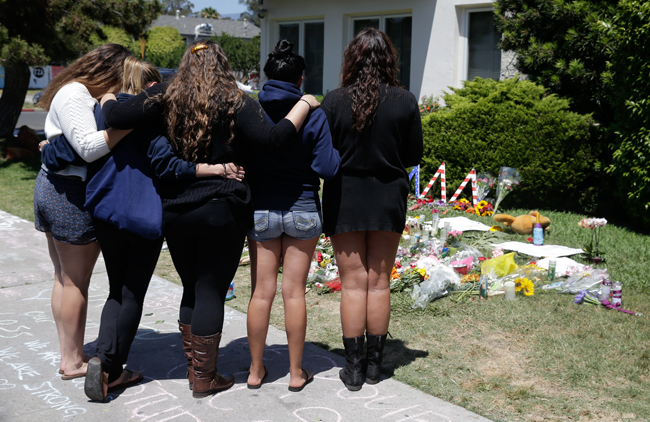 Standing at the checkout counter of an Office Depot, I spotted the bright pink canisters. I thought of past occasions when I could have used a can of mace — in the parking garage, downtown on a Friday evening or grocery shopping at night. Eventually the list grew to an uncomfortable length, and I didn’t buy it. I didn’t want to be reminded of my vulnerability every time I turned on the car or went home. I did not want to accept the unfortunate fear that many of us have adopted as young girls.

Every day, the news is flooded with stories of attacks on women who simply lived in a world that did not value them. A gang rape in India, a stoning in Pakistan, a fatal beating in China, a mass kidnapping in Nigeria, the sexual assault crisis in our armed forces and similar headlines make me want to stay home, with my door bolted and barricaded. My parents call to warn me that I shouldn’t go out alone at odd times unless I want to become a headline too. If I subscribed to the fatalistic belief that I could do nothing to stop it, I would be letting myself and other women down while letting violent men off the hook. Our silence is only a blessing for the kind of rhetoric, actions, systemic inequalities and mindsets to persist unchecked. When we let women accept that their bodies are not their own, we accept that their freedom is an option instead of a right.

On May 23, Elliot Rodger, a Santa Barbara City College student, sped through Isla Vista, Calif., intent on retribution. For what? Being denied his right to sex with “hot” women. The self-proclaimed “perfect gentleman” killed seven and wounded 13 with a Glock 34, knife and his car. But the weapon that ultimately led to all of the carnage was his mind. At only 22 years old, Rodger had cultivated a belief that he was owed access to someone else’s body, because in his own words, he was an intelligent, attractive gentleman. Those characteristics were the keys to unlock a woman’s thighs. But he and the others like him are not owed anyone or anything. Women are not possessions. We’re human beings.

We hear the word feminism, but very few take the time to understand it. It’s not about transcending the status of men but standing next to them without retribution, fear or condemnation. It is the yearning of our basic right as humans to be recognized. It is the desire to not be counted out because of our bodies or excluded because of our experiences.

UT’s Gender and Sexuality Center uses historian Karen Offen’s definition to define feminism. “I would consider as feminists any persons, female or male, whose ideas and actions show them to … recognize the validity of women’s own interpretations of their lived experience and needs and acknowledge the values women claim publicly as their own (as distinct from an aesthetic ideal of womanhood invented by men) in assessing their status in society relative to men,” Offen says.

Violence against women is not something new. But why are our bodies and the acquisition of them constantly up for debate? We are categorized as wives or whores but are often denied the human right to be known simply by our names. We are externally sexualized and internally bound by the fear of one person taking it too far. We are conditioned to lock ourselves away from a world that intends to abuse us or to perpetuate the abuse already inflicted. The only way to change that is to eradicate the hateful thoughts that spur those actions. We can’t fight from the towers where we have hidden. We can’t fight from the corners we’ve been beaten into or from under the shoes that have kicked us down.

All women have experienced different transgressions. But the universal truth of all of those narratives is that we’ve survived them. Slavery, war, imprisonment, rape, domestic violence, human trafficking, acid attacks and exile have not weakened our resolve or battered our spirits. History is chock full of these painful experiences, of the lives lost due to ignorance and violence. We are privileged to live in a time and in a part of the world where we can change the conditions we’re told we deserve into the conditions we’re rightfully due as human beings. Let’s not waste it hiding or acquiescing to ignorance. If someone you know has been sexually assaulted, help and support them. If you hear someone say something sexist or defamatory, call them on it. If you see someone being unwillingly sexualized, say something.

The Elliot Rodgers of the world can easily be stopped with force when they go on the rampage, but if we use our words and actions, we can prevent them from starting in the first place.

(If you or someone you know is suffering from sexual assault, domestic violence, verbal abuse, or thinking about hurting themselves or someone else, please contact the UT Counseling and Mental Health Center; Voices Against Violence; the Rape, Abuse & Incest National Network; Behavior Concerns Advice Line; or 911 immediately.)

Maney is a journalism senior.

Correction: An earlier version of this article misidentified the school where Rodger was a student.