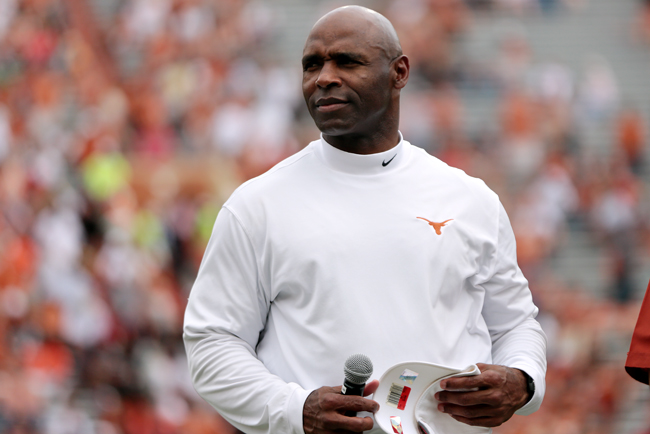 Football is king in the state of Texas. To many, it may seem strange to see the brutal game of football revered in Texas. Yet once you step into the University of Texas’ Darrell K. Royal-Texas Memorial Stadium, it’s easy to get caught in the religion that is Texas Longhorn football.

For some of you, this fall will be the first time you attend a Texas football game as a student at the University. Here is what you need to know before the first game comes around:

Q: Where does the football team play?

The stadium is named after the late legendary Texas coach Darrell K. Royal, who was the head coach for the Longhorns from 1957-1976. During his 20-year tenure at Texas, Royal posted a 167-47-5 record, including three national championships, and 11 Southwest Conference championships.

Texas’ stadium also serves as a war memorial. After the stadium was completed in 1924, the student body dedicated it in honor of the 198,520 Texans who fought in World War I.

Q: Who does Texas play?

Texas plays in the Big 12 conference that features 10 teams.

The Longhorns will play each of the other nine conference members. Of those games, Baylor, Iowa State, TCU and West Virginia will be played at home.

Q: Who are Texas’ rivals?

A: Oklahoma, Texas A&M and Baylor

Oklahoma and Texas meet every year in Dallas at the Cotton Bowl. The rivalry has been going on for more than 100 years.

Since Texas A&M left the Big 12 for the SEC in 2012, the two teams haven’t met formally, but the rivalry rages on, especially on social media.

Baylor and Texas are budding rivals. The Bears are rising in the Big 12 and have given the Longhorns plenty of tough contests in the past few years.

Q: Who is Texas’ head coach?

For the first time in 17 years, Texas has a new head coach: Charlie Strong. As Mack Brown’s successor, Strong has big shoes to fill. Brown led Texas to two National Championship games and ranks as one of the greatest coaches in program history. Strong hopes to reach even greater heights, but it will take time.

Q: Who are the assistant coaches?

A: Once coach Strong was hired by the University, he hired a staff of some of the most highly regarded coaches in the nation.

The staff includes former Texas defensive back Vance Bedford, who has taken the role of defensive coordinator.

The team has seven other coaches.

Q: Who is the quarterback?

A: That answer is tricky…

David Ash is the most likely starter. Ash is a redshirt junior who has played three seasons at Texas. However, he missed most of 2013 season due to concussions and his status is still not entirely certain.

Sophomore Tyrone Swoopes is the only other quarterback that has some game experience. Many expect incoming freshman quarterback Jerrod Heard to make an impact as soon as he gets the chance.

Q: Who are the most important players?

Malcolm Brown will be the workhorse for the offense this upcoming season. As a senior, he’s expected to make a big impact, especially given the questions surrounding the quarterback position.

Q: What is the season outlook?

A: Texas finished last season at 8-5 after a loss to Oregon in the Alamo Bowl.

With the hire of coach Strong, the team received a much needed face-lift. But the season won’t be easy. Texas has one of the toughest schedules in the nation. Expect the Longhorns to improve over last season, but, given the question mark at the quarterback, it’s tough to imagine another national championship run anytime soon.

Welcome to the University of Texas, where football is a religion and church takes place on Saturdays at Darrell K. Royal-Texas Memorial Stadium.