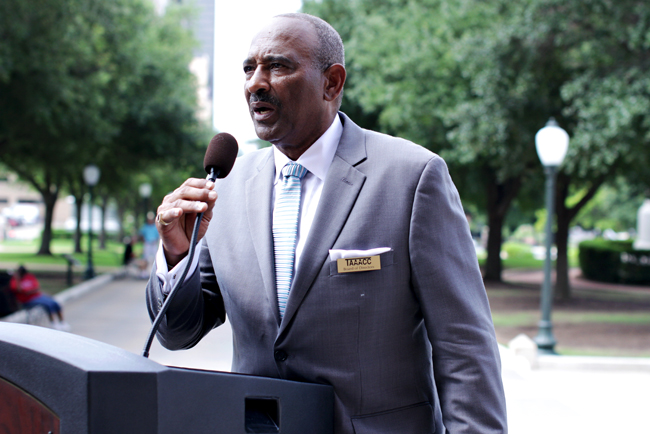 The number of black-owned businesses in Texas is growing, but the businesses remain smaller than the state’s average, according to a report released Thursday by the Bureau of Business Research of the IC2 Institute at the University.

Bruce Kellison, associate director of the bureau and lead author of the report, presented the report to Jim Wyatt, chairman of the Texas Association of African American Chambers of Commerce on the south steps of the Texas Capitol on Thursday morning.

A large crowd, including state Sen. Royce West, D-Dallas, and President William Powers Jr., gathered in honor of Juneteenth, the holiday commemorating the day — June 19, 1865 — that news of the emancipation of slaves reached Texas.

“Because we are a business organization, we imagine that Juneteenth signaled the beginning of black entrepreneurship in Texas,” Charles O’Neal, executive consultant for the association, said.

Black-owned businesses are a growing segment of the Texas economy, rising from 5 percent to 7 percent of all Texas businesses between 2002 and 2007, according to the U.S. Census Bureau of Statistics.

“I’m so proud that the University of Texas could be a part of this,” Powers said. “We won’t know what we should be doing until we know what the lay of the land is.”

At the event, Kellison highlighted some of the key findings of the survey and suggested some goals toward which policy makers and business makers could unite. The report, which surveyed 914 black business owners, found training in accounting and finance as well as access to capital were the two key areas for training and challenges to overcome.

“Educational programs should target black business owners in the service and construction sectors,” Kellison said. “These sectors appear to be strengths of the black business community already and dovetail nicely with the general diversification of the Texas economy.”

A similar report on Hispanic business owners was issued in 2012.

Terry Bell, CEO of Enhanced Production Technologies and an attendee of the event, said he thought it was important to motivate a collection of people to join in efforts to improve the business landscape.

“The significance of the report is first a starting basis of awareness,” Bell said. “Having press conferences like this and having surveys are the first steps to look at how we bring balance into our nation as a melting pot of various cultures.”

The complete report is available at http://ic2.utexas.edu.