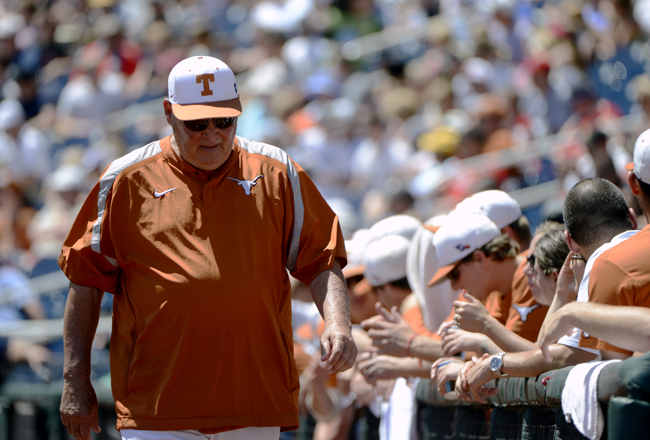 OMAHA, Neb. – Before any of the reporters could ask any questions, before the moderator even had a chance to introduce the Texas players in the post-game press conference, Augie Garrido dropped his bag and took a seat at the podium.

“Sorry I’m late,” he said. “But we have 27 kids with broken hearts and I thought it was important to talk to them.”

Broken hearts indeed, and reasonably so.

The Longhorns’ rollercoaster season came to an end Saturday night, as Texas dropped a 10-inning, 4-3 decision to Vanderbilt at TD Ameritrade Park, ending their tremendous run in Omaha.

“Both teams really gave it everything they had,” Garrido said. “Simply, [the Commodores] got one more run than we did and they get to move on because of it.”

Vanderbilt’s walk-off win in extra innings brought an abrupt end to a College World Series run that was just as surprising as it was impressive for Garrido’s ball club.

After losing their opener to UC Irvine last Saturday, the Longhorns had no room for error the rest of the way. They had to win four straight to advance to the Championship Series, and they fell one victory short.

“The pain that goes along with taking the risks that they did, to go all in and put everything they had on the line like they did, is emotionally very difficult to deal with when you don’t have a lot of experience with the down side of it,” Garrido said.

Certainly Texas will be disappointed with the result, as they were unsuccessful in reaching their goal of winning a National Championship in 2014.

But considering how inexperienced so many of the players on this team were in February, and how poorly this team was playing in April, their unlikely run in June can’t be considered a failure.

“They have life experiences here,” Garrido said. “It’ll help them later on, whether they choose to compete in business or whatever they chose to be. They no longer fear failure because it isn’t a failure when you do your best, and they did that.”

Garrido continued to heap on the praise after the tough loss, as a few of his players sat beside him at the podium, each with a unique look of deflation cast across their sweaty faces.

“This group is the best team since 2005 at Texas in my opinion,” he boasted. “And they have every reason to treat themselves like champions.”

Just like last year, and any year that Texas has failed to dog-pile in Omaha, this season ends with a loss. But unlike last season, when many of these same players were part of one of Texas baseball’s worst teams of all-time, the feeling is that this year was, in many ways, a success.

“Once the grieving stops, and it will take place for a while, then they need to recognize clearly what they’ve won,” Garrido said. “They’ve won a hell of a lot more than they’ve lost.”