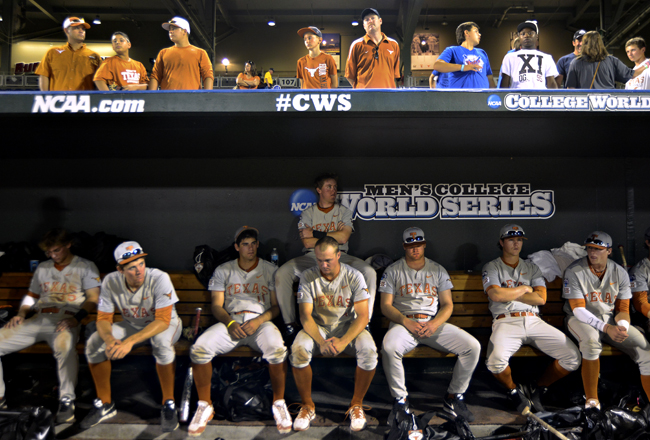 OMAHA, Neb. – Sophomore shortstop C.J Hinojosa nearly came up with the big hit in the top of the 10th inning and was unable to make the play in the bottom of the 10th, as Vanderbilt defeated the Longhorns in the 4-3 in extra innings Saturday.

Hinojosa crushed a ball to deep right-center field to lead off the top of 10th that appeared to be an extra base hit, but Vanderbilt’s Rhett Wiseman had other ideas, sliding to snag the ball with a web-gem caliber catch for the out.

"Probably the best swing I had all day," Hinojosa said. "And off the bat I did think it was over his head. He's a good outfielder, he tracked it well and made a great play on it."

In the bottom of the inning, Vanderbilt rallied with two outs. Wiseman singled off of sophomore pitcher John Curtiss and stole second base, which led to Curtiss walking Vandy’s Ro Coleman. Curtiss then beaned Karl Eddison to load the bases for Tyler Campbell, who was making only his third start of the season in place of suspended Xavier Turner.

Campbell hit Curtiss’ 1-1 pitch toward the left side of the infield and legged out Hinojosa’s throw to first, allowing Wiseman to score the game-winning run.

"I got the first [two] guys out," Curtiss said matter of factly after the game. "But then they got a hit, then I walked a guy, then I hit the guy. And then I gave up the game losing infield single. That's the way baseball goes."

The hit batter, who was only hitting .203 for the season, to load the bases was yet another error in an imperfectly played game by the Longhorns and it ultimately cost them.

Texas got into trouble early against the Commodores, who took a 1-0 lead in a first inning that could’ve resulted in a lot more damage as they twice loaded the bases, but only came away with one run.

The Longhorn bats were dormant in the first three innings, going a combined 1-for-8 while stranding three.

Vanderbilt extended its lead to 2-0 with the help of two Texas errors in the bottom half of the third inning.

But the Longhorns weren’t going to go down without displaying the signature grit that helped them go from fifth place in the Big 12 to one of the final four standing in Omaha.

Hinojosa led off the fourth inning with a double and was advanced to third base after junior right fielder Collin Shaw reached on a bunt hit.  Sophomore leftfielder Ben Johnson proceeded to walk, which loaded the bases. After Tres Barrera struck out, freshman first baseman Kacy Clemens delivered with a single that scored two and evened the ball game.

The Longhorns had another opportunity in the fifth inning and appeared to be getting to Vanderbilt’s Carson Fulmer. Senior centerfielder Mark Payton walked with one out then advanced to second on a failed pick off and then third on a wild pitch. Hinojosa walked on four pitches and Shaw forced an eight-pitch walk to load the bases, spelling the end of Fulmer’s night.

However, Vanderbilt replaced him with freshman Hayden Stone, who induced an inning ending double play on his first offering to Johnson.

The Commodores took the 3-2 lead in the bottom of the frame when Wiseman crushed the ball deep towards the very top of the wall in right field, driving in the go ahead run.

Barrera led off the sixth inning with a triple to center field and, after a strike out by Clemens, Gurwitz delivered a one-out single to tie the game at three.  Gurwitz managed to advance to second on a failed pick off, but senior designated hitter Madison Carter struck out to end the threat.

And with that went Texas’ final threat to take the lead. The Longhorns never lead in this one and fatally stranded 10 runners on base.