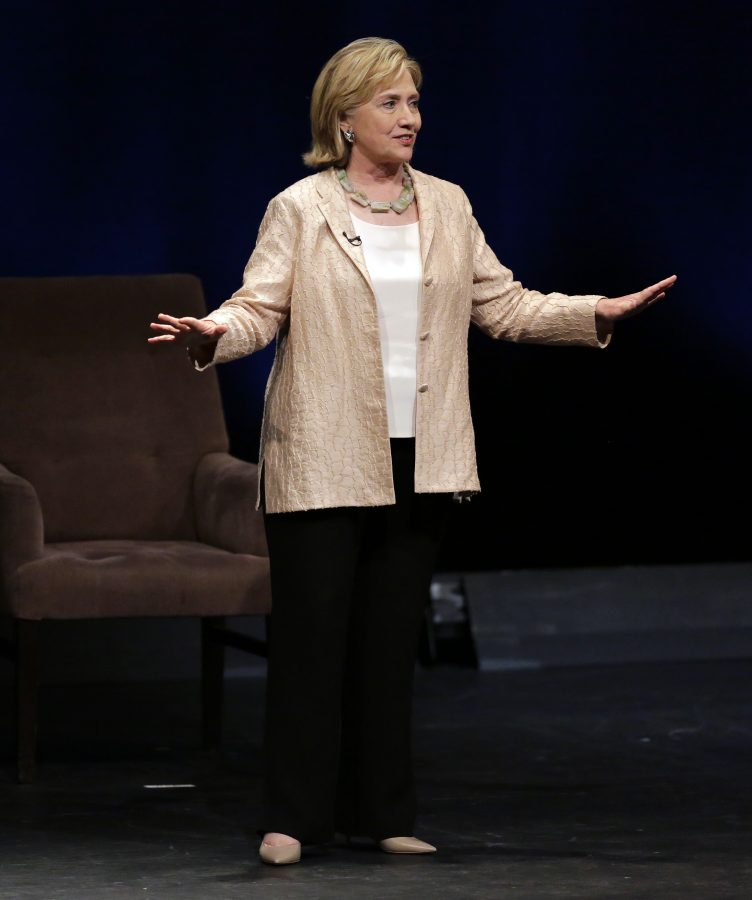 On Friday, Hillary Clinton addressed the people of Austin at the Long Center as part of a promotional series for her newly-released memoir, “Hard Choices.” The former secretary of state and US Senator signed books, answered questions and opened up to Austinites about everything from Indonesian talk shows to the future of public diplomacy.

Although this tour was not likely made without a political agenda (Clinton is the top presidential choice for Texas Democratic candidates, with a whopping 65 percent party approval rate in recent polls), Clinton was careful to create an air that was incorporative, bipartisan and highlighted the importance of public service regardless of party identification. The night was equal parts reflective and inspiring as Clinton Hillary offered lessons from her job as Secretary as well as a vision for our nation’s future.

Clinton spoke on both triumphs and regrets during her time at the State Department, as well as the struggle to maintain a “big picture” perspective for international affairs. According to Clinton, this perspective means placing a premium on how the U.S. is perceived by other countries and understanding the lengthy cause-and-effect that can spur from such relationships.

“[I think people need to realize] events in Paris, France… can affect us in Paris, Texas. What is happening far from our borders really does hit home,” Clinton said.

Although Clinton had initial reservations about coming to Texas, her speech seemed to be received very well by UT students.

“As a woman…. Clinton makes me feel empowered”, said biology senior Chanel Zadeh. “She brings a rare offering to politics, a combination of using her head and her heart. I think that’s what translates really well to people.”

Always the eloquent speaker, Clinton navigated controversial waters with ease — even when it came to some of the heavily polarizing issues, such as the Arab Spring protests of 2011 or the terrorist attack on the US consulate in Benghazi, Libya in 2012.

“The [attack in Benghazi] was my biggest regret,” Clinton stated remorsefully, adding that tragedies of this nature “should not be used for partisan political purposes.”

She quieted criticism of Obama’s decision to send additional military advisers to Iraq, noting that possibility for statewide democracy is “too soon to tell.” Her answers, while lacking no degree of Hillary-sized ambition, were both poised and non-partisan — traits that seemed to go over well with the Austin audience. “Texas is a tough crowd for any Democrat, but she did well,” Zadeh said. “I was impressed.”

Clinton spoke openly and candidly about an overarching commitment to public service and the importance of using our voices not to silence each other but rather to communicate to today’s world.

“We are all part of an [indispensable nation],” Clinton writes in “Hard Choices.” “And we are Americans, all with a personal stake in our country.”

Even critics of Clinton appreciated the candor and frankness of the night.

“I’ll be honest. I’m a Republican so I was a little hesitant to come tonight. But Hillary was really great”, said one anonymous student. “[The night] felt less like a political agenda being forced down our throats and more like an actual honest conversation. It was good.”

It is this less-radical-legislation, more relationship-setting approach to politics that has cast a new light on Clinton as a team player—and perhaps she is a more respected politician for it. Her “smart power” approaches to foreign policy were nuanced and largely without controversy. Aside from the Benghazi attack and the Egyptian protests of 2011, involvement in polarizing foreign policy crises has been kept to a minimum. Her tenure was more calm than controversy, more intricacy than immediacy.

It is not just Clinton’s work as a former First Lady or secretary of state that has earned her a unique and somewhat starry-eyed fan base. Rather, the most resonant of Clinton’s actions seem to be those taken on behalf of human rights. Clinton’s ongoing commitment to gay rights in Geneva, Islamic religious liberation and international women’s and children’s freedoms have made her a celebrated figure in many circles. One of her greatest achievements, she noted during the question-and-answer portion of the evening, was paying careful attention “not only to the headlines, but to the trend lines.”

But what about a future as Madam President?

“I could see it,” said government junior Julie Forrister. “Clinton has vision, perspective and the impressive political track record to support it… She’d have my vote.”

It is people, not policy. It is relations, not legislation. Though this passive and passionate side to Clinton may simply be another cog in her political agenda-setting machine — it seems that this wiser, softer Clinton might just see her day in the Oval Office, after all.