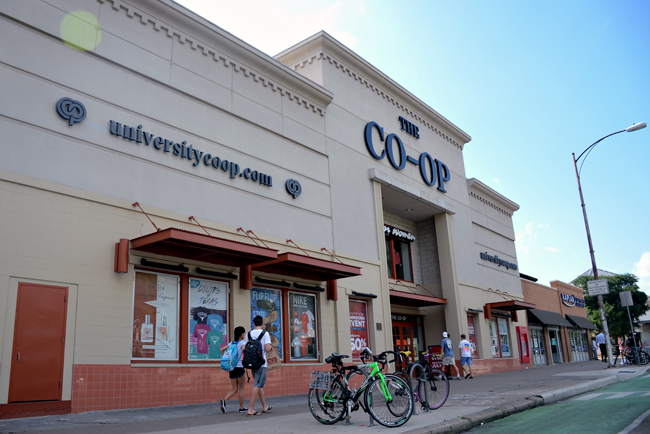 Fall is just around the corner, and for incoming freshmen that means getting acclimated to campus. As the new Longhorns settle into their dorms, they will surely start to think about books and other materials for their new classes. Most will find their way to the University Co-op.

For many students, outside of purchasing their textbooks, they won’t revisit the Co-op until the time comes to purchase graduation regalia. However, the Co-op is much more than just a place to buy textbooks and gowns. The Co-op has a rich history and partnership with the University, and there is a lot you may not know about the conveniently located store. Here are five little known facts:

1. The Co-op is a not-for-profit entity.

That’s correct. The Co-op gives it profits back to the University and is not an entity of the University but, rather, a standalone company. Many of the company’s proceeds go toward grants, scholarships and awards such as the Hamilton Book Author Awards. The Hamilton Award, which goes to a faculty member with outstanding research as judged by a panel of University scholars, is just one of many examples of the Co-op’s giving. Other awards include the Mitchell and Granof Awards for undergraduate and graduate students, respectively.

Additionally, the Co-op has provided money for many buildings on campus such as the Flawn Academic Center, the renovation to the Fine Arts Library and many technical and nursing programs.

In 1896, the Co-op was formed by UT faculty and students. It was originally intended to support the UT community at large and still aims to serve that purpose today. Initially housed in the Tower, it was a place to buy pencils and basic school supplies.

The Co-op exists in its current form as a result of the University’s needing a larger book store. The Co-op has since expanded into one of the nation’s largest collegiate bookstores. It is also among the world’s top 25 companies in mobile development (thanks to mobile shopping).

3. The Co-op is probably covering more ground than you thought.

The Co-op currently has two locations in Austin, as well as stores in Houston, Dallas, Fort Worth and San Antonio. The company also owns the art supply store on the Drag and the picnic area located behind its flagship. All of these locations offer the widest array of UT merchandise offered anywhere.

4. The Co-op offers competitive pricing with an eco-friendly twist.

According to Co-op student representative Jake Schwartz, the Co-op is “giving people good deals. [It helps] that were are so close, convenient and competitive. Realistically, the more you buy the more you help the University." Schwartz also stated that any item the Co-op sells is within roughly $5-$10 of prices listed on Amazon, which, given the proximity of the store to campus, is really just negligible once you include shipping fees.

Outside of competitive pricing, the Co-op aims to be a green company. Almost all of the graduation hats and gowns are made from recycled material. The company ships with the most earth-friendly material available and has phased out the use of styrofoam, replacing it with a biodegradable material made from recycled paper.

5. The Co-op gives directly to students.

The Co-op is a multi-million dollar company with six student board members. The representative positions are an opportunity for students to oversee a $40 million company, and yet only six people ran this past year for the two open student seats.

Sadly, despite the Co-op’s largesse and integral role in the University’s history, many students are left in the dark about its function. I would argue that the Co-op has done a poor job of reaching out to the UT population. Its contributions to entities such as the Flawn Academic Center are only listed on small plaques, leaving large but, for all intents and purposes, unsigned marks of its contributions to campus. Not only is the Co-op our bookstore but also a great University benefactor.

So next time you go in to purchase books, remember that you are not at a University-owned store but, rather, a non-profit company whose sole purpose is to serve the University. Perhaps the above information doesn’t alleviate the cost of that $300 MIS textbook, but it should broaden your understanding of this campus fixture.