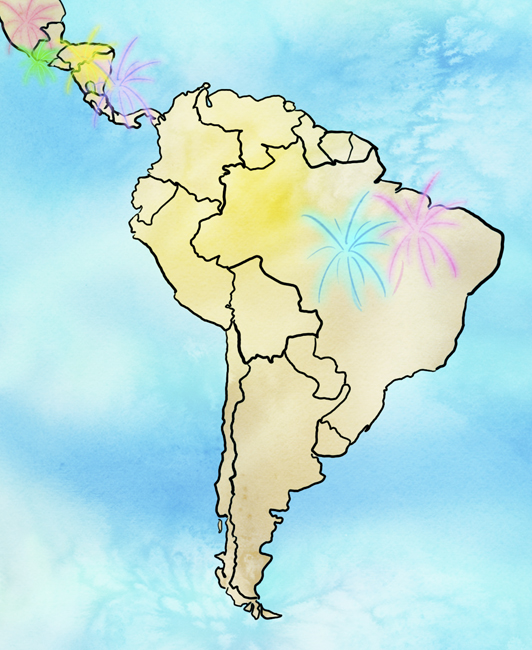 The Fourth of July, our national holiday that celebrates the independence of the original 13 colonies from the British Empire, is a day of patriotic celebration, with patriotic citizens gathering their friends and family members to enjoy barbecue, watermelon and fireworks. South of the border, celebrations of national independence also focus on countries gaining freedom from their imperial forefathers, but vary
in tradition.

“[The dancing] is more of, like, focusing on the culture of what makes Brazil, Brazil — not having to do with Independence Day exactly, but more like celebrating the culture,” Silva, a civil engineering sophomore, said. “In the independence month, they would have something in the museums or in the city, but I do not remember it being a big deal.”

On a larger scale, the countries of Central America, including Costa Rica, El Salvador, Guatemala, Honduras and Nicaragua, celebrate their collective independence from Spain in 1821 on Sept. 15. Monica Monroy, an international student from Guatemala City, Guatemala, said her school would
participate in parades and decorate the classrooms
to celebrate.

“I’ve only experienced this in the capital city where a lot of bands train [for the celebration], and the military is there, so they perform for the president. There’s also a torch ran around the country,” Monroy, a civil engineering sophomore, said. “They start selling merchandise like flags a month before, and it’s a really big deal to decorate your car or wear a Guatemala T-shirt that day.”

Moving north, Mexican Independence Day, or “Grito de Dolores,” is on Sept. 16, and celebrates the beginning and end of the revolutionary war against Spain. They celebrate “Los Insurgentes,” or the revolutionaries, who participated in the war that led to Mexico gaining
independence. Amadeus Miranda, a women’s and gender studies junior, has visited Ciudad Juarez, Chihuhaha, to celebrate, and said that each city holds its own celebration, while the capital city celebration done by the president is broadcast nationally.

“Everyone gathers in front of the City Hall on the eve of Sept. 16. Once midnight hits, the mayor of the town comes out of City Hall on the balcony and rings a bell. Every time he rings the bell, he shouts ‘VIVA ____!’ The blank is filled with each name of the Insurgentes, the city it is being done in, and lastly, ‘VIVA MEXICO,’” Miranda said. “This is known as ‘El Grito.’ People do this because this is what the priest who started the Mexican Revolution did on the day the revolution started.”