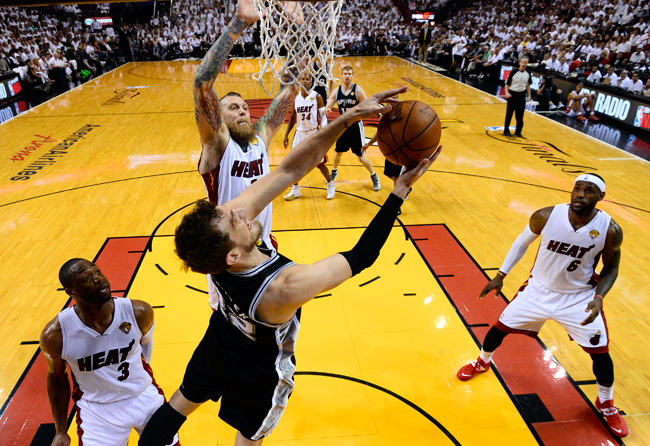 This summer the San Antonio Spurs won their fifth NBA championship, crushing the Miami Heat in the NBA Finals four games to one. The 2013-2014 San Antonio Spurs are one of the great championship teams in NBA history, and their recent victory further solidified the Spurs as perhaps the best franchise in professional sports. This year’s team also personified the sacrifice of individual acclaim for a greater goal, a characteristic increasingly rare in athletics, which, even on the collegiate level, focus on profit today.

The Spurs avenged last year’s devastating loss to the Heat in the NBA Finals. In Game Six of the 2013 series, the Spurs were on the verge of winning a championship, up by 5 points with 28 seconds left, before a series of errors and miraculous plays by Miami cost them the game. Two days later the Heat won the 2013 NBA crown in Game Seven. It was an absolutely gut-wrenching defeat for Spurs players, coaches and fans, the type of loss that could set a franchise back for years. But the Spurs entered the 2013-2014 season refusing to feel sorry for themselves. In training camp, head coach Gregg Popovich showed the team the film from the 2013 Finals and urged the players to use the loss as motivation for the upcoming season.

And use it they did. The Spurs stressed teamwork over individual performances. The Spurs finished the regular season with the league’s best record, and Popovich won NBA Coach of the Year. Throughout the season and playoffs, the team employed a playing system based on crisp passing, excellent three-point shooting and brilliantly-executed fundamental basketball skills. In the NBA Finals, the Spurs completely dismantled the Miami Heat, with each victory coming by at least 15 points. For his superb play, Kawhi Leonard, a third-year player for the Spurs, was named the Most Valuable Player of the NBA Finals. Heat players themselves praised the Spurs.  Chris Bosh, the Heat’s center, exclaimed after the series: “They played the best basketball I’ve ever seen.” LeBron James, the Heat’s Forward and team captain, similarly described San Antonio: “It’s all for the team and it’s never about the individual. That’s the brand of basketball, and that’s how team basketball should be played.”

The Spurs, with their consistent winning and class, are widely considered the model franchise in the NBA, and indeed, one of the best in all of professional sports. Popovich, who played college basketball at the Air Force Academy, is a brilliant tactician who runs his team with military precision while embracing a family-like atmosphere. R. C. Buford, the Spurs’ unassuming general manager, along with Popovich, has a knack for scouting basketball talent around the globe.  (Buford was named the NBA’s top executive this season.)

The Spurs have benefited from having gifted basketball players with selfless personalities on their roster over the years. The team and its players are beloved in the Alamo City and often participate in service events throughout the region, much like UT student athletes do in Austin. During the ‘70s and ‘80s, Hall of Famer George “The Iceman” Gervin, James Silas and UT alum Johnny Moore introduced basketball to San Antonio. In 1989, David Robinson began his Hall of Fame career with the Spurs and achieved much success in the ‘90s with teammates Sean Elliott and Avery Johnson. Not until the arrival of Popovich in late 1996 and Tim Duncan in 1997, however, did the Spurs reach their full potential. Robinson and Duncan formed the “Twin Towers,” using their size to dominate the low post, and won the franchise’s first NBA championship in 1999. The duo won the title again in 2003 in Robinson’s final year, aided by newcomers Manu Ginóbili, Tony Parker and Bruce Bowen. The Spurs also captured NBA championships in 2005 and 2007. Both the franchise and its players have demonstrated great loyalty to one another. The front office rarely makes blockbuster trades, contributing to a sense of stability in the organization, and Spurs superstars frequently take pay cuts to allow more cap room for the team to spend on free agents who help the team compete for championships.

An individual-first attitude plagues professional sports today. Money too often drives athletes and team owners. Players frequently seem more concerned with earning riches than winning championships. Management seldom exhibits loyalty to athletes, as players suffer the uncertainty of trades and being cut from the team. Owners likewise appear most interested in the bottom line, and are not opposed to moving franchises to other cities if more profits can be made. These negative attributes in professional sports unfortunately can make fans cynical. The issue of money also has become controversial in college sports, as debate rages over whether or not student athletes should be paid for their part in helping university athletic departments make historic profits. Recently, the National Labor Relations Board ruled that student-athletes at Northwestern University could form a union. UT possesses the wealthiest athletic department in the country, and will have a major voice in future discussions about paying college athletes.

Because of the individual-first attitude in professional sports today, it is immensely satisfying to see the San Antonio Spurs rewarded for their team-centered excellence. The 2013-2014 Spurs team deserved this championship for so many reasons. Hard work, talent, game execution and redemption from last year’s brutal defeat, yes, but mostly because the players, coaches, and entire organization conduct themselves with professionalism, loyalty and class that make the Spurs the model NBA franchise.  With hall of fame veteran leadership and emerging stars like Kawhi Leonard, the Spurs are in good shape for the future. Congratulations to the San Antonio Spurs for an amazing championship season and for conducting themselves in a manner that reminds fans how truly great sports can be when individuals sacrifice for a greater team goal.