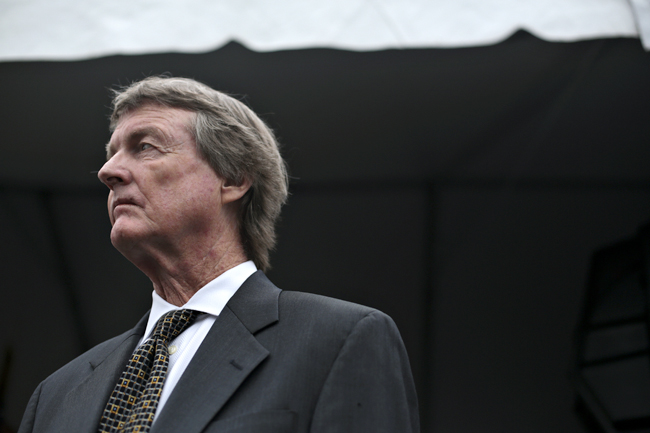 Update (July 6, 11:03 p.m.): Powers' letter in response to Cigarroa's request for his resignation was obtained and published by the Austin American-Statesman on Sunday.

In the letter written on Friday, Powers said he would not resign immediately but was willing to discuss a timeline for exiting after the 2015 legislative session.

“Throughout my tenure, I have always striven to act in the best interests of the University,” Powers said. “I believe a graceful rather than abrupt departure after nine years in office is in keeping with that."

Original Story: UT System Chancellor Francisco Cigarroa told President William Powers Jr. he must resign from his position or be removed by the Board of Regents at an upcoming meeting, according to media reports on Friday.

The reports come weeks after the System announced in June it would hire an outside firm to conduct an investigation into UT’s admissions process.

In May, the System released findings of its own limited investigation into legislative influence over admissions. That inquiry, conducted by two System officials, found no evidence of structured system of wrongdoing, but determined instances where letters from legislators sent directly to Powers or a dean likely influenced the admissions process.

In light of the reports, students, faculty and alumni have voiced their support for Powers. After speaking with the parties involved, Texas Exes President Kay Bailey Hutchison and Chairman Charles Matthews confirmed the reports in a letter sent to members of the alumni association on Sunday. Hutchison and Matthews called Powers “a great leader” and said his removal would be harmful to the University.

“A forced resignation or firing would be a travesty for UT,” Hutchison and Matthews said. “It would cause further tension with legislators regarding UT System, would compound unrest among faculty, students, and alumni, and invoke serious harm to the institution’s reputation in the national spotlight.”

Hutchison and Matthews said they were hopeful Cigarroa and Powers would be able to agree on a “succession plan.” On Friday, the Faculty Council Executive Committee also released a statement in support of Powers.

"On behalf of the General Faculty of UT Austin, the Faculty Council Executive Committee unanimously reiterates its strong support for the presidency of William Powers who, under extraordinarily difficult circumstances, has fulfilled his position with distinction," the committee said. "He has greatly enhanced the quality and stature of the institution's undergraduate education, its graduate programs, its research mission, its commitment to medical education and care, and its service to the community and to higher education generally."

While some students and alumni have voiced their support and shared a petition on social media, Student Government President Kori Rady said he is worried about how the timing of the decision will affect student input.

"I've always been a large supporter of President Powers," Rady said. "Something I'm concerned with, especially from a student perspective, is that these decisions are being made during times that students aren't really in town. Students aren't able to be the most active in voicing their opinions."

At a board meeting in December 2013, Cigarroa recommended Powers remain in his position but warned him to improve his relationship with the regents.

Cigarroa announced his own resignation in February to return to practicing medicine at UT Health Science Center at San Antonio. Cigarroa will remain in his position until his replacement is selected.