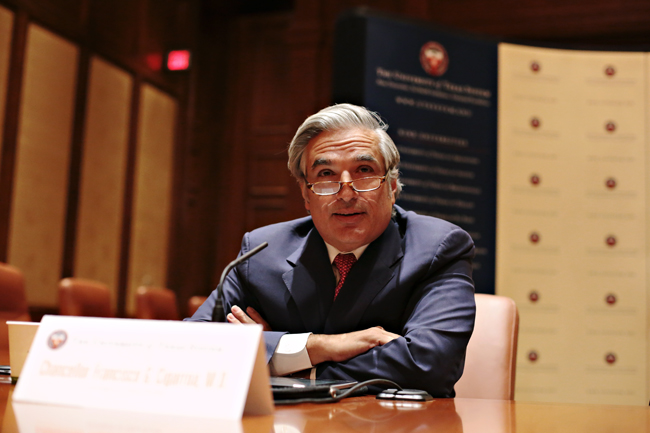 In a statement on Monday, UT System Chancellor Francisco Cigarroa said his decision to ask President William Powers Jr. to resign was because of a "communication and trust" issue.

"In recent days I have been accused of acting at the direction of the governor or some members of the Board of Regents in this decision and of taking steps that will ultimately damage UT Austin," Cigarroa said. "Nothing could be further from the truth.  I have supported Bill Powers consistently for the last five years, but this latest decision originates with the UT System’s Office of Academic Affairs and my office and is based on a breakdown of communication, collegiality, trust and a willingness to work together for the good of the university."

In a letter to Cigarroa, Powers said on July 4 he wanted to leave at the end of the 2015 legislative session rather than in October, as Cigarroa requested. In his statement, Cigarroa said he was unable to reach a mutual decision on a exit timetable for Powers and will discuss the issue with the regents at a meeting on Thursday.

In June, Cigarroa announced the System would hire an outside firm to conduct an investigation into the University's admissions process. In May, a limited System inquiry into legislative influence over admissions at the University  found no structured system of wrongdoing but determined letters of recommendation sent directly to Powers or a dean likely influenced admissions in certain instances.

Cigarroa did not cite in his statement a specific reason for his decision or mention whether it is connect to the Univeristy's admissions.

Cigarroa announced his own resignation in February to return to practicing medicine at the UT Health Science Center at San Antonio. He will remain in his position until his replacement is selected.