President Powers to stay on until June 2015 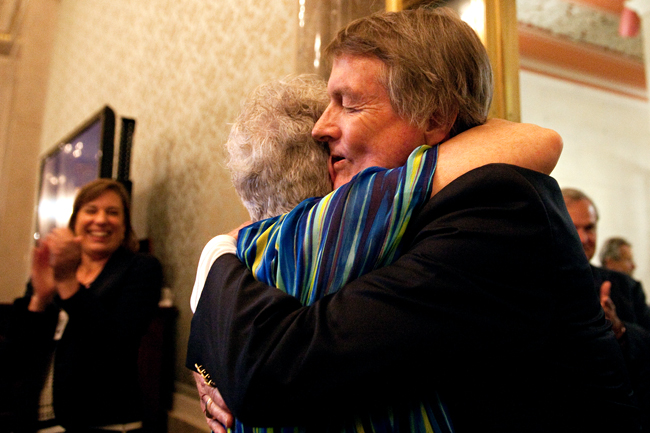 In an unexpected decision, UT System Chancellor Francisco Cigarroa announced President William Powers Jr. will remain in his position until June 2, 2015 in a statement on Wednesday.

Cigarroa previously requested on July 2 that Powers resign by October to coincide with the end of Powers’ $3 billion fundraising campaign and his chairmanship of the Association of American Universities. Instead, Powers requested that he be allowed to stay on until the end of the 2015 legislative session in a July 4 letter. In his statement on Wednesday, Cigarroa said keeping Powers until 2015 would allow for a smoother transition.

"President Powers, who has led great advancements for the University, has expressed a desire to remain in his position long enough to complete several important initiatives, lead the University through the upcoming legislative session, and allow for a smooth transition to new leadership," Cigarroa said. "I honor his commitment to UT Austin and agree that this is the best course forward."

Before his statement on Wednesday, Cigarroa had said he would discuss Powers' employment with the Board of Regents at a meeting on Thursday.

According to Cigarroa, the System will begin a national search in August to replace Powers. Clairifying his statement on Monday, Cigarroa said his decision to ask for Powers' resignation was because an overall difficult relationship with Powers and not related to one particular issue.

"It is, however, time for an orderly change in leadership. While ultimately productive, the past years have not been without struggle and, at times, conflict and controversy," Cigarroa said. "There was no single incident that prompted my decision to ask President Powers for his resignation last week, but a long history of issues with communication, responsiveness and a willingness to collaborate."

“I want to thank the chancellor and Chairman Paul Foster for their leadership of the University of Texas System, working with President Powers, and of course, recognizing the contributions he has made to our great University,” Fenves said.

Before ending the meeting, Faculty Council unanimously approved a resolution in support of Powers. After the meeting, Powers said he was pleased with Cigarroa's decision.

"We have a great faculty and a great group of students. I'm humbled and gratified by all the work we've done together and your support," Powers said. "This is a career path that makes sense for our family."

In an email sent to students after the meeting, Powers said he would return to teaching at the School of Law after his term ends.

Prior to Fenves' announcement, Faculty Council members began taking turns voicing their support for Powers. During the meeting, English professor Alan Friedman said the faculty could boycott a new president if Powers were removed by the regents.

“I cannot imagine anyone else having done better or even as well,” Friedman said of Powers. “Certainly not someone imposed by those responsible for creating the crisis that has wracked the campus for the last several years.”

After the meeting, Student Government President Kori Rady said he believes the decision to continue Powers' presidency was influenced by the support shown by students, faculty, alumni and staff over the past few days.

“He received massive support from every entity,” Rady said. “I really think that made the difference, and of course I think it’s very difficult to fire someone based on communication differences if that person has that amount of support.”

A petition in support of Powers has reached more than 14,000 signatures as of Wednesday. Rady said Thursday's planned student march from Republic Square to the regents meeting will be canceled.