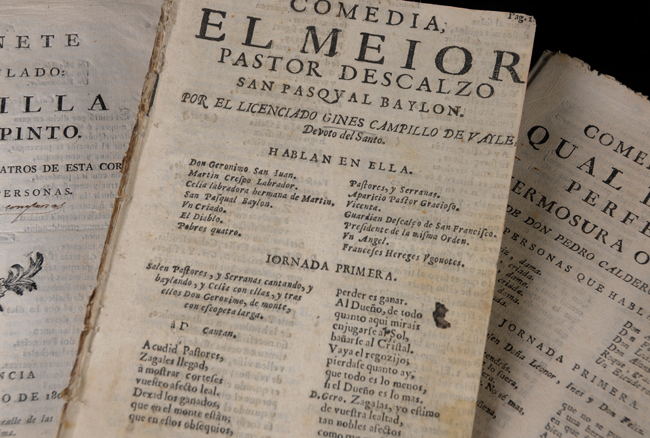 Acquired during the 1920s and 1930s, the collection today exceeds more than 15,000 plays and includes over 2,500 Spanish authors, according to Madelin Sutherland-Meier, associate professor in Spanish and Portuguese. While most of the collection dates back to the mid-19th century, some plays, like one by playwright Juan de la Cueva, can be traced back to the 17th century.

Sutherland-Meier said the comedias sueltas can help researchers better understand the history of printing of Spain and also reveal the interests of everyday Spanish readers during that time period.

Richard Oram, associate director of the Harry Ransom Center and Hobby Foundation librarian, said the collection would also interest researchers in theater history and the history of the book.

Sutherland-Meier said annotations, music sheets and illustrations included inside the plays has attracted attention from scholars covering a wide range of fields.

“A number of the texts have musical scores, so musicologists, especially scholars who study the genre known as the zarzuela, will also find much of interest in the UT collections,” Sutherland-Meier said.

Sutherland-Meier said the collection had been known to many scholars, but was previously inaccessible. In 2010, the Harry Ransom Center received a $137,015 grant from the Council on Library and Information Resources to create an extensive database searchable by author, title and keyword. Oram said the cataloguing of the collection was critical for providing greater accessibility.

“You might as well not have them if they cannot be used, “Oram said.

Jacob Hakim, classics and Latin senior and a fan of traditional theater, said he would be interested in looking at the collection of comedias sueltas to understand the culture and history behind the plays.

Sutherland-Meier said the Department of Spanish and Portuguese, the Department of Hispanic Studies at Texas A&M University and the Ransom Center will host a conference celebrating the cataloguing of the collection on September 29 and 30.