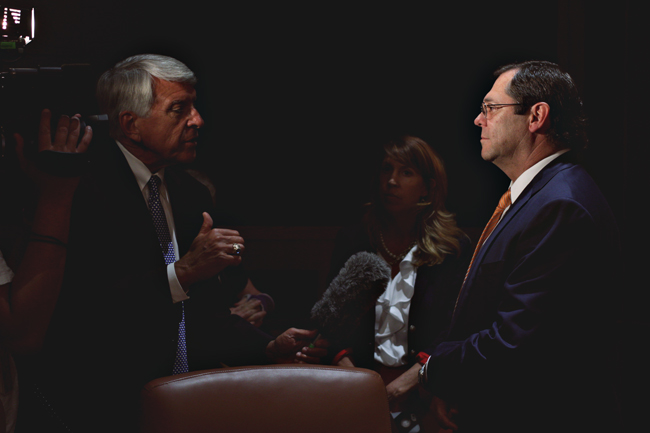 In the first UT System Board of Regents meeting since Chancellor Francisco Cigarroa asked President William Powers Jr. to resign, Chairman Paul Foster expressed disappointment with “insulting and disparaging comments” sent to Cigarroa over the past week and called on the board, System and University to move forward.

“I sincerely hope we never revisit this unfortunate chapter in the history of this great state,” Foster said. “There’s much good work to be done and the state and the nation are watching, and the future is bright.”

After the meeting, both Foster and Cigarroa refused to identify who sent the comments but said they were not threatening and were from parties and individuals outside the board.

Foster, who said he was pleased Cigarroa and Powers agreed on Wednesday to set Powers’ resignation for June 2015, also asked the Texas Legislature not to try influencing board decisions.

“The point is the board has a role. It’s not political. We’re not politicians,” Foster said after the meeting. “I believe we should be left alone to do our business.”

While the House Select Committee on Transparency in State Agency Operations co-chairs sent Foster a letter on Monday requesting that Powers not be removed, Foster clarified he was not criticizing the committee’s investigation into Regent Wallace Hall or its right to do so.

During the meeting, Regent Alex Cranberg said he agreed with Foster’s comments and mentioned Hall had also received negative backlash since news broke of Cigarroa’s request on July 4.

“I think it’s time for people to put their swords down and start trying to look to the future,” Cranberg said.

The regents also approved recommendations from Cigarroa for improving admissions processes at System institutions. While presenting the recommendations, Cigarroa said his decision to ask Powers to resign was not related to the System’s investigation into the University’s admissions, which will be conducted by an outside firm.

Among Cigarroa’s recommendations were increased transparency in admission processes and ending the practice of allowing letters of recommendation sent by influential individuals directly to a president or dean’s office instead of through the prescribed process to be considered in admissions decisions.

“What concerns me is how external input outside the formal admissions process is handled administratively and within the University of Texas,” Cigarroa said.

In May, a limited System inquiry into the University’s admissions determined there was no structured system of wrongdoing but found instances in which letters of recommendation sent directly to Powers or a dean likely influenced admissions decisions.

Foster said he will form a search committee for Powers’ replacement in August. Cigarroa announced his own resignation in February to return to practicing medicine at UT Health Science Center at San Antonio but will remain in his position until his replacement is selected. After the meeting, Foster said the board and System have interviewed multiple candidates.