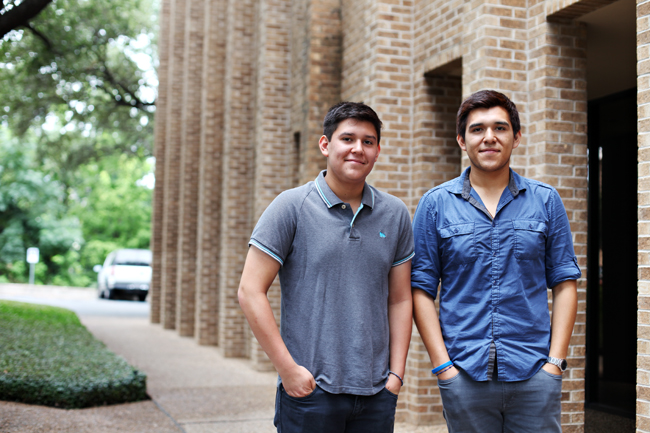 When engineering junior Juan Belman and his 16-year-old brother Mizraim Belman interrupted President Barack Obama's speech on July 10 with calls for an end to deportations, Juan said he was prepared to be escorted out or even arrested.

“All around us we saw White House staff, the Secret Service, behind us there was a lot of media,” Juan said. “So just to get up and call out the most powerful person in the United States was nerve-wracking.”

Obama addressed the brothers’ remarks and agreed to speak with the brothers after his speech on the economy at the Paramount Theater in downtown Austin.

“I’m on your side, man,” Obama said during his speech. “Sit down, guys, we’ll talk about it later, I promise.”

According to Juan, the brothers were escorted backstage for a two-minute meeting with Obama. Juan said he asked the president to issue a new memorandum expanding the deferred action program, which currently grants undocumented immigrants between the ages of 15 and 31 temporary lawful presence if they meet certain requirements. While Juan and Mizraim Belman, who are both undocumented, qualified for the deferred action program, their parents did not meet the age requirements and are at risk of deportation.

Juan said he recounted his family’s story to Obama, who in return said he would use administrative action if necessary to address immigration reform. Mizraim said he hoped Obama would expand age limits for the deferred action program, which would exempt them from deportation.

In 2011, the Belmans’ father faced deportation proceedings after Austin police arrested him for a traffic violation. According to Juan, a judge closed his father’s case administratively two years later because of his father’s clean criminal record and positive impact in his community. Juan said his father’s case could be reopened by authorities if they choose to do so.

“He can still be deported at any moment,” Juan said.

Despite the president’s reassurance, Juan, who previously chained himself to the Martin Luther King Jr. statue during the Civil Rights Summit, said immigrant rights groups need to continue to pressure President Obama to stop deportations through direct actions.

“We have to remind him because every single day that he’s out there traveling and raising money, there are families being deported,” Juan said. “These are our communities, our parents, our neighbors, our friends.”

While Juan and Mizraim protested Obama’s speech from within the Paramount Theater, members of the University Leadership Initiative, an immigrant rights advocacy group at the University, chanted outside the theater and held posters demanding an end to deportations.

Daniela Galvan, University Leadership Initiative secretary, said she believes protests like Juan and Mizraim’s would be necessary to bring the president’s attention to immigration reform.