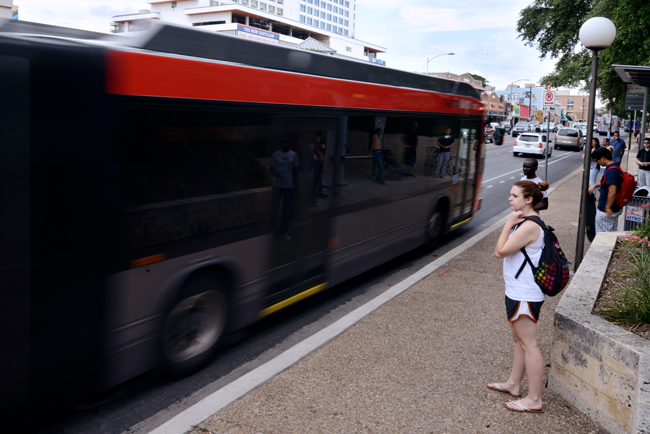 Capital Metro will launch MetroRapid 803, the city’s second bus rapid transit route, on Aug. 24, replacing a UT Shuttle at the start of the fall semester.

The new MetroRapid route will run from The Domain to the Westgate Transit Center along Burnet Road and Lamar Boulevard. The route will also make stops near campus along Guadalupe Street via a shared pathway with MetroRapid 801, which launched in January.

MetroRapid 803 fleet hit the streets on July 15, ahead of the route’s launch later this month. During the full-scale system test, all 15 buses operated like a regular service day, to make sure the technology and route timing works.

“When we launch on [Aug. 24] we want to be practiced and we want it to be perfect and, so, we just wanna make sure that all the parts and pieces work well together in advance of that,” said Dottie Watkins, Cap Metro vice president of bus and paratransit services.

The route will replace the Pickle Research Campus route and complement Route 3, running along a similar path. Running every 12-20 minutes, MetroRapid 803 will offer faster transit time by decreasing the number of stops compared to regular bus routes. Route 3 runs every 30-40 minutes.

“One of the key benefits of [more frequent stops] is that, when it’s that frequent, you really don’t have to rely on a schedule anymore,” said Todd Hemingson, vice president of strategic planning and development for Cap Metro. “You, basically, can walk out to the stop and know that, just within just a few minutes, the next bus will be there.”

Anthropology graduate student Sierra Castedo said she took a class at the Pickle campus last year and said service to campus would have benefitted from MetroRapid service because the PRC shuttle runs once an hour.

Just like the 801 route, the new buses will use priority lanes and are equipped with signal priority technology, which can extend a green light to help a vehicle stay on schedule. They also offer free WiFi and run on clean diesel fuel, meeting the latest emission standards from the Environmental Protection Agency.

The concept of rapid transit in Austin began in 2004, with Cap Metro’s “All Systems Go” plan, which was followed by years of planning to determine routes. The Federal Transit Administration awarded Cap Metro a $38 million grant in 2012 to bring that concept to reality. The grant covered 80 percent of the cost of the MetroRapid project. Cap Metro paid for the remaining 20 percent.

Along with the Pickle campus and Barton Springs, Hemingson said the 803 route will also serve popular food destinations, such as Whole Foods Market, Central Market and Wheatsville Co-op.

“We really have tried to include a number of different features and have it go where students actually want to go,” Hemingson said. “If you like food, it’s a great route to ride.”