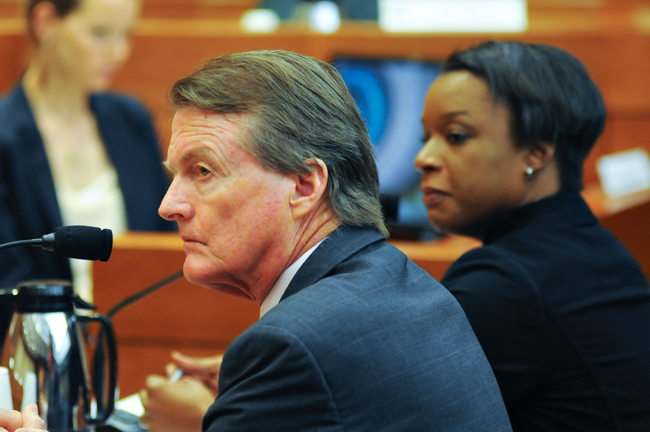 President William Powers Jr. and Kedra Ishop, vice provost and director of admissions, listen to suggestions made by the Senate Higher Education Committee regarding methods of increasing student diversity outside of the top 10 percent Wednesday morning. " />

President William Powers Jr. and Kedra Ishop, vice provost and director of admissions, listen to suggestions made by the Senate Higher Education Committee regarding methods of increasing student diversity outside of the top 10 percent Wednesday morning.

As the University celebrates what could be considered a victory in the Fisher v. University of Texas case, one has to wonder what there is to celebrate. Sure, the U.S. Court of Appeals for the Fifth Circuit seemingly gave a stamp of approval to UT’s holistic admissions review process, which allows the University to take race into account, but, unfortunately, the capacity to use race as a decision factor narrowly benefits racial minority groups that are in vogue, while another — black applicants — is disadvantaged by the system.

Let’s be frank. When the term “affirmative action” was first associated with race, the intended beneficiaries were black people who had historically experienced de facto and de jure discrimination based on their skin color. Positive discrimination, or affirmative action, was used to correct legal inequalities that had oppressed the black community for such a long time.

UT, along with many universities in the South, is certainly no stranger to racial controversy concerning admissions. In the case of Sweatt v. Painter, for example, the Supreme Court ruled that the University could not deny admission to the Law School based on race. Edwin Dorn, the former dean of the LBJ School of Public Affairs, once said, “The University desegregated slowly and reluctantly.” And, while today, admissions numbers do not reflect a university reluctant to accept all minorities, the numbers do show an institution headed in the wrong direction as far as black students are concerned.

Over the past few years, the percentage of undergraduate students who identify as black has constantly declined from a number that wasn’t so high to begin with despite an increase in the black population in every major city in Texas besides Austin. In 2009, black students comprised 4.9 percent of the undergraduate population, and enrollment for the fall semester of 2013 was down to 1,701 students, which is now 4.3 percent of the undergraduate student body. The number of black graduate students is even lower with roughly 300 black students total enrolled in graduate programs. Conversely, Hispanic students, correlating with an increase in the state population of Hispanics, have the second highest representation on campus behind white students, making up 21.7 percent of the population, which is equivalent to more than 8,000 students. The percentage of Asian undergraduates has remained relatively constant. Certainly, it could be argued that black students have been and will continue to be underrepresented because the number of applications submitted by black students barely exceeds 2,000, but the admissions rate is still lower for black students than it is for the largest minority groups on campus.

The lack of a substantial black population, which includes a faculty of which black teachers make up roughly 3.7 percent, is quite noticeable. Homecoming coronations, probates and step shows are probably foreign ideas to most students who aren’t black. Yet any given student has probably heard of the Holi festival held during the spring semester every year, for example. The importance of diversity does not lie within simply increasing the number of non-white students on campus. Diversity fosters understanding between cultures, and black culture is not highly prevalent on UT’s campus, leaving few people aware of what it means to be black. Of course traditions often associated with historically black colleges and universities are not the only aspects of black culture, but they are good introductions to the community on a college campus.

The University should take advantage of the opportunity to increase diversity on campus, but extended opportunities for admission cannot be unique to “buzz minorities.” The decision by the appellate court means nothing if UT continues to maintain a black student quota of just over 2,000 students out of more than 50,000 total students enrolled at the University. With this ruling, the administration has the responsibility to move forward and not just allow the number of black students on campus to dwindle.

Davis is an associate editor. He is an international relations and French junior from Houston.