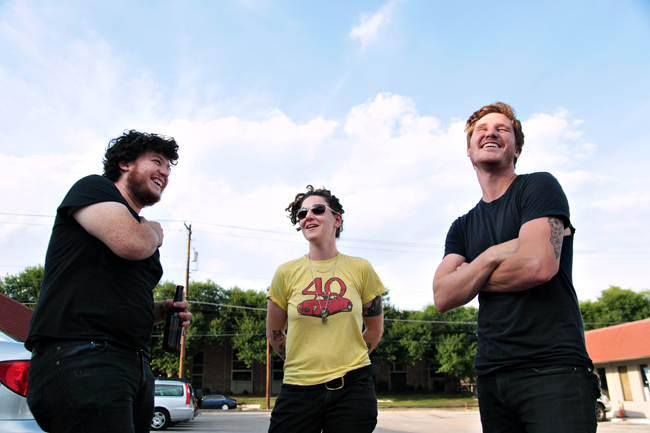 There is something off-putting about The Dead Space’s debut LP, “Faker”. Released three weeks ago on local label 12XU, the album is not extremely loud or noisy, like expected. What it does have is a quiet intensity — an inescapable sense of tension and bleakness at the core of every track.

According to bassist/vocalist Quin Galavis, this darkness is deliberate.

“I’ve always been into the darker, the post-punk, since I’ve been old enough to remember,” Galavis said.

The band formed when Galavis met guitarist Garrett Hadden at McCallum High School. The two bonded over a shared teenage love of nu-metal.

“Probably one of the first conversations that Quin and I ever had was, we were in English class together, and he said, ‘Hey, you play guitar, right? You know any Marilyn Manson songs?’”
Hadden said.

The band started to take form in 2008, with Galavis and Hadden playing along to a drum machine. They quickly recruited fellow schoolmate Jenny Arthur to play drums, and the band expanded from there.

“We had Jasmine, who played bass, and at one point we even had a keyboard player,” Hadden said. “Russ moved to Portland and we played with Jasmine for a number of years, to about 2011. Eventually, we ended up with just the stripped down trio of us, and I feel like kind of what we’re doing now was born out of that.”

Once the band settled on their current configuration as a trio, they started working on recording their album. But it took four years before the band solidified their sound and released
the album.

Part of the problem was in the band’s interactions with the Austin scene, and playing with other Austin bands.

“We had this whole dark vibe, and when we were first playing shows, every band was a rock and roll band,” Arthur said. “We would play shows with the OBN IIIs and the Flesh Lights … And that honestly kind of affected our songs somewhat because we were trying to match the energy of the shows we
were playing.”

Eventually the band was able to reach a point where they were happy with their material and finished recording.

What the band made was “Faker,” an album composed of ten knotty and taut Gothic post-punk songs. Opening track “Fall Away” sets the tone with its driving bass lines and restrained drumming,
waiting to give way to some sort of climax but never does. The band creates classic sounding Goth rock with the likes of “Behind The Wall,” buzzing guitar catchiness with “Right Now,” and bleak drone rock with closer “So Long.” All the while, The Dead Space holds onto that sense of tension and darkness that is crucial to
their sound.

“We were trying to be a band that we weren’t, and I think with this record, we were finally comfortable and said, ‘This is the record we want to make,’” Hadden said.